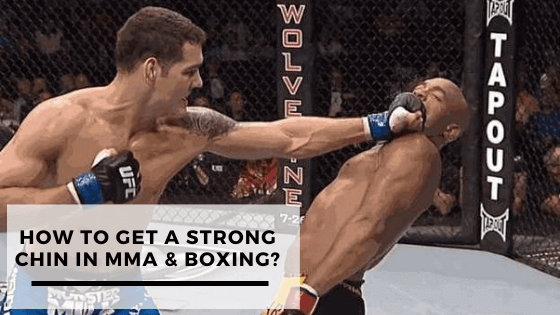 Throughout the growth of combat sports, whether it’s boxing, kickboxing, wrestling, or even MMA, there has been a raft of changes to fighting styles, techniques, and the likes

But one thing has remained constant, and that is the chin.

A fighter’s chin is perhaps the most crucial part of his arsenal when he’s prepared to take on an opponent, you could have all the skill in the world.

And be as prepared as anyone can be, but one single perfect hit to the chin, and you’re out cold.

This point is further emphasized when you look at some of the past and present UFC champions.

Athletes like Khabib, Jon Jones, Kamaru Usman, Max Holloway, and Conor McGregor, and even huge MMA stars like the Diaz brothers and Tony Ferguson all have one thing in common, and that is their phenomenal ability to take a punch.

So today, we’re going to be taking a look at what makes some fighters have good solid chins and how effective it is in the long run.

WHY DO SOME FIGHTERS HAVE GOOD CHINS?

Before we delve right into the topic of the day, it’ll be of benefit to the reader to understand how a hit to the jaw causes a knockdown, or knockout as the case may be.

A punch to the jaw or chin causes the head to spin around, this movement causes trauma to the brain, rendering the person being hit unconscious.

This is a result of the brain getting slammed into the inside of the skull, thereby causing a temporary or permanent state of rest, depending on how powerful and consistent the hits are.

So why do some fighters have solid chins?

Well, there is an argument that the ability of a fighter to take a punch is genetic, and there is some truth to this.

When you look at fighters who are of Mexican heritage, you can hardly find anyone that isn’t as tough as nails.

This isn’t to say that all Mexican fighters are tough or that all fighters with solid chins have a link genetically to Mexico.

But considering the fact that fighters like Nick and Nate Diaz, Tony Ferguson, Brian Ortega, Kelvin Gastelum and some others are some of the toughest combat sports have seen, it’s hard to disagree with this.

There have also been discussions that fighter chin strength is also known as neck strength.

In a report by Dr. Matt Pitt, he argued that the sternocleidomastoid muscles on either side of the neck massively determine a fighter’s ability to take and withstand a punch.

Taking a look at someone like Yoel Romero, you can see the sense in his argument, but overall, this explanation for why some fighters have strong chins doesn’t hold much ground given the number of fighters with wide necks that still get knocked out.

Perhaps the most important factor in having solid chins is proper conditioning.

A lot of fighters go through a lot of unhealthy practices during fight camp and fight week, the sum of which is extreme weight cutting.

We have watched fighters struggle to take hard shots at a smaller weight class, but when they fight at their natural weights.

They take hard shots without even flinching, take Robert Whittaker for example.

There is a popular saying in combat sports, that “it’s the punch you don’t see coming that knocks you out”.

This statement can’t be more true.

The difference between seeing a punch coming and already bracing for impact, and not seeing the punch before and while it lands can make a huge difference in how a fighter can withstand a hit to the jaw.

Also, it would be a lot easier for you to get knocked out if you are already off-balance before receiving the shot.

This is why wide-eyed fighters like Jon Jones and Conor can withstand heavy shots.

Now, there may be other factors as to why some fighters have stronger chins than others, but the list above is the most comprehensive.

But you might be asking yourself, we have seen fighters who were once known for their ability to take superhuman shots, suddenly become “glass chinned”.

The cause of this is very simple;

Well, the short answer is that it’s not.

Throughout a fighter’s career, he goes through a wide range of activities.

Intense sparing sessions, weight cutting, and the worst of all, constant hits and blows to the head during intense matchups; Over time, there are bound to be repercussions.

As the popular saying goes; “You live by the sword, you die by the sword”, it couldn’t be more true when it comes to combat artists.

So, there we have it for today, whether you’re a rookie in the world of MMA, a veteran, or just someone who wants to know about the sport.

You can’t deny that having a properly conditioned and solid chin can be the difference between a good, and a truly great fighter.