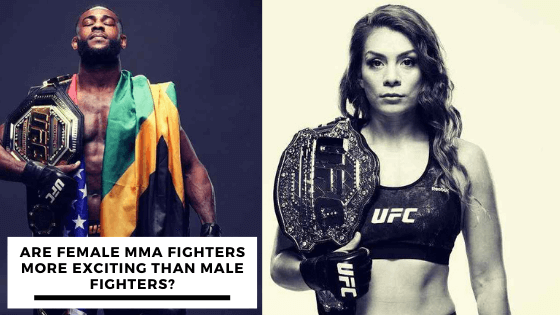 If you had asked this question 10 years ago, you would have been referred to as a “casual” in the sport.

A person who had just recently started watching MMA and had limited knowledge of it, but ask this question today, and you start a genuine and controversial conversation.

So we’ll be attempting to answer this today.

We could answer this question with a “yes” or a “no”, but that’s not really what you’re here for; so we’ll analyze MMA fights, both male and female, and then answer the question.

What better way to compare the excitement of male and female MMA fights than using UFC 248 as a yardstick?

Two title fights on the line, a female co-main event, and the main event being a male fight.

If you watched that event, you already know where this is heading, but if you didn’t, we’ll address briefly the co-main and the main events.

The fight was between Joanna Jędrzejczyk, and Zhang Weili; if ever you wanted to watch a fight that combined all facets of MMA at the highest level, then that fight was it.

A pulsating pace throughout the 5 rounds, high-level striking and grappling, constant slug fests between both fighters, and both women looking physically battered at the end of the fight.

Such was the level of the fight that a lot of pundits have labeled it one of the greatest fights of all time.

Then fast forward a couple of minutes, to the main event between Yoel Romero and middleweight champion Israel Adesanya, if you haven’t watched that fight, then it’s best you don’t.

It was an absolute snoozefest, with both men standing off each other for the entirety of the fight.

While we can’t use just a single event to judge whether female fights have become more exciting than male fights, the reality is that there are a lot more “boring” male fights these days.

Compare this with the female MMA sphere, and there is a difference, you rarely see a fight that isn’t filled with excitement, tension and reckless abandon.

So, in reality, you could argue that it’s probably more of male fights and fighters becoming less exciting, other than female fighters being or becoming more exciting.

Going back to the original question; “are female fighters more exciting than male fighters?”

The answer to this is probably no because there’s no way of actually judging and knowing.

But if you ask; “are female MMA fights more exciting than male MMA fights?”, based on recent experience, this question will carry a more positive answer than the first.

The reasons for this vary, as there is the popular discussion of winning vs entertainment still ongoing.

But whatever the reasons may be, if you’re looking for high-quality, action-packed MMA, then you’d definitely be better off watching the women.