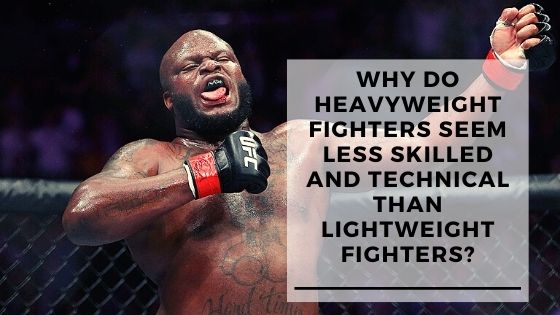 But just because they are in the same sport doesn’t mean they can be compared to each other.

Heavyweight fighters have completely different strategies when they step into the octagon. You rarely see a heavyweight match go the distance.

A fight lasting 3 rounds is a surprise, and witnessing 5 rounds of a heavyweight battle is a rare sight to see.

This is not the case with lightweights. First-round knockouts are rare, but you often see fights that last the whole 25 minutes.

So what exactly is the reason for this? It all comes down to power.

Heavyweights pack one-shot knockout power. But can the same be said about a bantamweight fighter or a flyweight fighter?

Yes, there are some exceptions, some fighters in lower weight classes can knock their opponents out, but generally, when a heavyweight fighter throws a clean punch, it is almost a knockout.

This is the first place where the skillset of a heavyweight fighter differs. Since heavyweight fighters can easily knock their opponents to win the match, that is what they train for. They train to back their punches with more power, and ways to land that one perfect punch.

On the contrary, a lightweight trains to hit as many punches, kicks, or whatever, which could either open up a KO or at least a decent combo. These guys focus more on the volume of strikes landed over the power of a strike. Because when it comes to the scorecards, the number of critical strikes could be the deciding factor.

The second reason why heavyweights look less skilled is, well their weight. With all those muscles and body weight to pull, they need more energy.

This means they lack the stamina to last 5 rounds. There are a lot of heavyweights to go through 5 rounds, but you seldom see a heavyweight hold his shape through 25 minutes.

To conserve energy, they reduce unnecessary movements as much as possible. They don’t move around a lot like lightweights. This is to save energy to throw in one massive strike.

These are the reasons why heavyweights look relatively less skilled than lightweights.

The bottom line is heavyweights aren’t less skilled or lack technical skills. They play to their strengths and train to polish the skill set they possess.

How Often Do MMA Fighters Get Broken Noses?

How Can I Beat A Boxer In A Self-defense Situation?

What Are The Most Commonly Used Steroids By MMA Fighters?