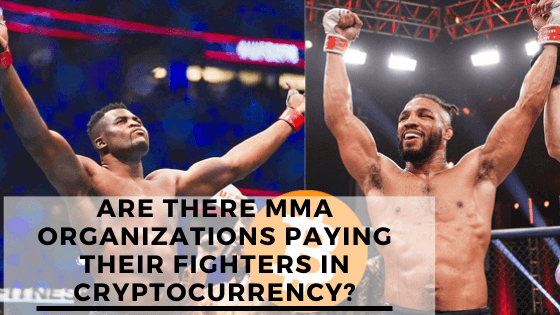 Just like MMA, cryptocurrency is a hot topic nowadays.

Regarded initially as a non-player in finance systems worldwide.

Cryptocurrency has now risen from its former days and is accepted as an alternative to centralized banking systems.

MMA has also jumped aboard the ‘crypto ship’ recently, along with other sports where athletes are getting paid in the block-chain based currency.

Lee said that one of the prime motivators for his decision to accept Eagle Fighting Championship’s offer was his salary being paid in Bitcoin.

In one interview Lee revealed, “It gives me a lot more financial security and will help me fight better, too.”

The other reason Lee signed the contract was because of Khabib Nurmagomedov, as he owns EFC.

“Just with Khabib being the backer behind it, not only does he have the respect of us as fighters but the respect from the people, too. He also has a lot of attention on him, so it makes sense.”

Lee was on the UFC roster before being released while on his six-month suspension when he tested positive for taking Adderall.

This is not the first time the MMA fighter has encountered Bitcoin.

In fact, Lee stated he had bought Bitcoin back in 2017 and “forgot about that money” until he had to pay for his knee surgeries.

The profit from his investment gave him “some money to live off” and since then he has been a believer in crypto.

2. UFC also jumps aboard the ‘Crypto ship’ with Francis Ngannou

Just a month after Kevin Lee signed the contract with EFC in Bitcoin.

UFC also announced giving the MMA fighter Francis Ngannou half of the prize money in Bitcoin.

UFC has been advancing on the digital currency front recently, while signing a $175 million deal with Crypto.com exchange and released their very own NFTS afterwards.

Cryptocurrencies and MMA go way back than Kevin Lee and Francis Ngannou.

Welterweight Jon Fitch became the first MMA fighter to fight for Bitcoin in 2015.

While UFC fighter Ben Askren was sponsored by the cryptocurrency LiteCoin for his match against Robbie Lawler in UFC 235.

Askren won just three and a half minutes into the game.