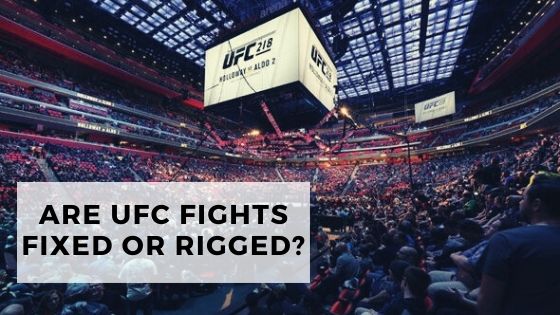 UFC fixing fights is a speculation that has been around ever since the UFC existed. A lot of events have further contributed to the fans who are troubled by this assumption.

One of them being, UFC signing pro wrestling stars like Brock Lesner and CM Punk.

Obviously, WWE and other pro-wrestling promotions are fixed. This makes us rethink about UFC signing WWE stars.

But first, for those who might not know what a fixed fight is, here is a short explanation.

What is a fixed fight?

A fixed fight or rigged fight is where those who are competing already know who is going to end up as the winner. This means the outcome of the fight is pre-determined.

If you have ever watched a pro-wrestling match, you would know how a fixed fight works. The entire fight is choreographed, there is a bit of back and forth, and one fighter emerges as the victor.

In MMA, fixed fights are rare, but they do exist. Pre-determining the victor of a match in MMA is hard. Convincing the fans is even harder, but it is not impossible.

Fixing fights are good for business, so some promoters and even fighters take their chances at a fixed fight.

Fixing fights makes sense. After all, throwing out the word undefeated will bring in a lot of viewers.

So the UFC could fix fights to keep unbeaten streaks alive, like Khabib Nurmagomedov’s. But will the UFC do such a thing?

The simple answer is, no. UFC does not fix fights even though it might seem compelling to assume so. But the UFC does tend to take a page out of WWE’s book when it comes to organizing fights.

In the UFC, there is a ranking system where fighters are ranked according to their weight class.

According to this, the fighters ranking 1 or 2 should be the next in line for the title shot. But occasionally you find someone jumping the line out of nowhere and fighting the champion.

These are fights put together due to the money the fighters bring.

This was seen when Brock Lesner came into the UFC. He was 1-1 in his first 2 fights and still got the title shot.

This is because his popularity brought in a lot of viewers, which convinced the UFC to arrange him for a title shot to generate much bigger revenue.