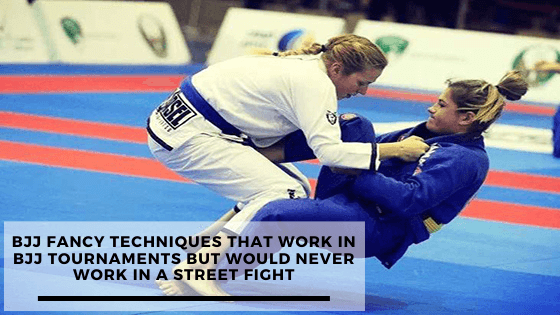 BJJ is often touted as being a great martial art for use in a real street fight, but several techniques may work well in BJJ tournaments but would never work in the actual “real world.”

In this article, we’ll list some of the techniques that may give you an advantage in a BJJ tournament but could potentially get you seriously hurt in an actual street fight.

The berimbolo is a technique that can be used to take your opponent down to the ground and then roll over their back to take their back.

This is a great move for BJJ tournaments as it can give you a quick and dominant position.

However, in a street fight, if you try to pull this off, you are likely to get punched in the face while you are trying to take your opponent down.

Because this technique works by you using your legs to hook around your opponent’s legs and then rolling over their back. This takes away your ability to defend yourself while you are setting up the technique.

The helicopter armbar setup is a beautiful take on the traditional armbar.

It involves you spinning underneath your opponent while setting up the armbar.

It can be set up from a balloon sweep attempt, which means the opponent will be resting on your feet in mid-air.

However, in a real street fight, with adrenaline and emotions running wild, the opponent may twist, turn and flail their limb around.

Not only can that lead to them catching you with a clean shot, but you might lose control, leading the opponent to crash into you with all their body weight and injure sensitive areas like your groin.

The twister is a very controversial move in the BJJ community. Some people love it, and some people hate it.

The move was popularized by Eddie Bravo and involves putting your opponent in a scarf hold position and then turning your body so that you can apply the submission.

While it may work well for BJJ tournaments, if you try to pull this off in a street fight, the other person might punch or kick you while you are trying to turn your body.

This move is really dangerous due to the twisting motion involved, but it is also very easy for the other person to get out of if done incorrectly.

The banana split guard is a favorite in BJJ tournaments because it offers the option of moving to various positions from the half guard.

You could go for a calf crush, the banana split submission, or control their back.

It may sound very good on paper, but in a real street fight, the other person can just stand up and punch you in the face while trying to go for the sweep.

Furthermore, even after you roll them, they have one of their legs free, and if they are fast enough, they can up-kick you in the face if you are not careful.

So there we go.

Those are some techniques that work well in BJJ tournaments but would never work in an actual street fight.

While they may offer you an advantage in a controlled environment, they could potentially get you killed in an uncontrolled one.

So be careful if you ever find yourself in a real street fight and save these moves for the tournament matches.

Who Are The UFC Matchmakers?