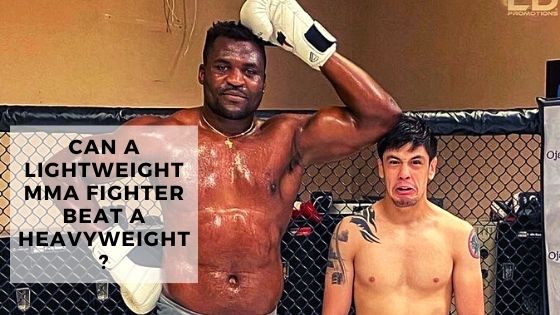 This is something that has bugged the MMA community for years. Even though heavyweights pack a lot of power, they lack stamina.

This sets up an age-old battle. Speed vs. Strength, Skill vs. Power, Stamina vs. Explosiveness. So which attribute has the edge?

There is a reason why we have weight classes in MMA. Anyone would say it is to keep fights fair and not to let weight dominate the sport.

There are 2 ways of looking at this.

If you put a professional lightweight fighter and a 250-pound untrained guy inside an octagon and lock the cage door who would come out as the victor? 9 out of 10 times the lightweight will maul the heavyweight.

Keep in mind that the heavyweight is not trained to fight. He might have some experience fighting in a bar or on the streets, but he won’t have the skillset to fight a professional fighter.

Even though the lightweight would be smaller, he could move much faster. And if the heavyweight cannot throw a proper punch, he is a lamb to be slaughtered.

Even if he can throw a punch, a professional fighter would see it coming miles away. This means connecting a punch is not going to be easy.

But if the heavyweight fighter knows how to throw a powerful punch, he does stand a chance to win. If he can connect one clean punch that could knock out the lightweight. But his chances are slim.

Here is an interesting simulation of what could happen between a lightweight professional fighter (Conor McGregor) and a 400lbs person (The Mountain).

Keep in mind that Hafthor Bjornsson aka The Mountain is a professional strongman who holds the record for the heaviest deadlift lift in the world 1104 lb/501 kg.

This is a completely different episode. This time the heavyweight is a trained athlete. In this scenario, the size does matter.

The first thing that will come to play is reach.

Heavyweight fighters are larger and taller than lightweights. This would mean they have a reach advantage.

So even if a lightweight fighter was fast and plans on quick jabs on the heavyweight fighter the reach and height would end up being an unwinnable matchup.

Next, we have to look at the power.

But even if the lightweight can muster up a 10 strike combo he won’t be able to do the same level of damage.

But the lightweight does stand a chance of victory if he fights for points rather than a finish. He should move fast and connect shots.

Play a defensive game in the early rounds. As the heavyweight tires in the latter rounds, he can make use of his endurance.

To conclude, a lightweight fighter could easily beat a heavyweight who has no clue of what he is doing inside an MMA cage.

But if the heavyweight is a professional, the extra 100 pounds will make a difference. There is a reason why there are weight divisions in MMA.