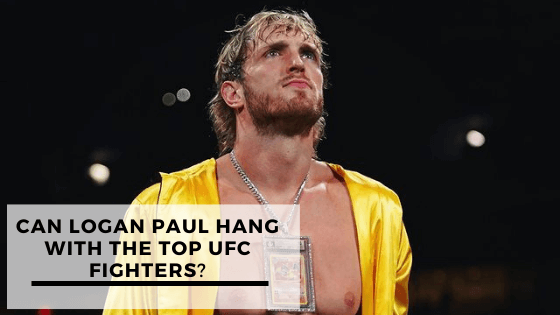 Can Logan Paul hang with some of the top fighters in the UFC?

Well, following the rumors fuelled by Logan Paul himself and UFC president Dana White, it seems like a Logan Paul appearance in the octagon is certainly on the cards.

Dana appeared on an episode of Impaulsive, the name of Logan’s podcast, and didn’t rule out signing the YouTube star to the promotion.

While there is a lot to be discussed and sorted out before Logan makes a UFC appearance, if he wants it, and Dana wants it, then it will be done.

So we’re going to jump the gun a little bit and talk about how Logan Paul would fare against some of the top fighters in the UFC.

A lot of you might not know this, but Logan has a very solid wrestling background from high school and college.

In fact, so solid that he was ranked fifth in the OHSAA State Championships back in 2013.

And he continued in this vein in college where he joined the wrestling team at the Ohio university wherein, the team was regarded as NCAA Division 1 for wrestling.

This speaks volumes about his wrestling credentials, more impressive was that his wrestling record according to some reports ended at 34 wins and 2 losses.

This is what Logan is most popular for in the world of combat sports.

The professional fight ended as a split decision loss against KSI, and the exhibition fight ended in a No Contest against Floyd Mayweather.

So the big question is, based on those two fights, can Logan box?

The short answer is no, but there is more to it.

Keep in mind that two fights aren’t really enough to make an informed decision on his boxing credentials.

And the fact that he doesn’t have any boxing background whatsoever, but when you’re going against elite boxers in the UFC, there is no excuse and no margin for error.

As far as Logan’s skillset in combat sports is concerned, that’s about it, there really isn’t any information to confirm whether he has gotten any training in jiu-jitsu or any other martial arts discipline.

But will this be enough in the UFC?

Make no mistake about it, Logan is an extremely physical and athletic guy, he is tall and strong, and given his last fight was at 199 pounds.

He should be able to make either the middleweight or the light-heavy divisions of the UFC with relative ease. So how would he fair against someone like Darren till or Thiago Santos?

The honest answer will have to be, not so good.

While his wrestling background might be solid, and given that Brock Lesnar steamrolled his way to a UFC belt with just his wrestling, the sport has evolved more than that.

You will hardly meet any fighter without a solid all-round skillset and just wrestling will not be enough.

His boxing isn’t impressive enough as yet, and we have no evidence to suggest whether he has solid kicks.

Also, in the KSI fight and especially the Mayweather fight, he gassed out pretty bad, and in the UFC, that will be heavily exploited.

This isn’t to say that he might not pick up a couple of wins against some unranked fighters, but against the top, his weaknesses will be exposed.