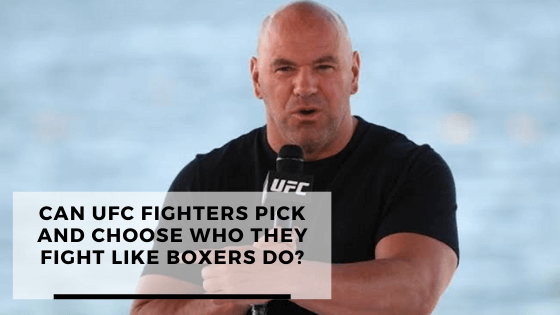 UFC fighters do not get to pick and choose who their opponents are. (Unless you’re a certain Irishman with chest tattoos).

Your job as a UFC fighter is to stay healthy, make weight, pass drug tests and fight whichever opponents you’re matched with.

The UFC has a board referred to as the matchmakers.

They identify possible matchups, weigh the possibilities, and then send the contracts to the fighters or their manager.

What a fighter can do is a campaign to fight a specific opponent.

However, it is the matchmakers who make the final decision on who fights who.

If the matchup proposed by the fighter makes enough sense according to the rankings, entertainment value, or revenue generation, they go ahead and make it happen.

A fighter also has the right to turn down a fight offered by the company, provided they have a valid reason to do so.

If the given reasons are acceptable, the fight is called off and the fighter is given time to recuperate.

On their return, they will be rescheduled to either face the same opponent or someone else.

A fighter turning down fights for trivial reasons such as not the opponent not suiting them will not sit well with the company.

The fighter in question falls out of favour, and a repeat could ultimately lead to getting cut from the promotion.

Yair Rodriguez, despite having a decent record was cut from the promotion for turning down 3 fights in a row.

A handful of fighters with massive star power, responsible for high revenue generation can play a more influential role in deciding on their opponents.

Guys like Brock Lesnar, Conor Mcgregor, and Nate Diaz have been known to sit at the negotiation table with the promotion.

An example of a fight being made at a fighter’s suggestion is Nate Diaz vs Jorge Masvidal.

After beating Antony Pettis, Diaz called for a fight with Jorge Masvidal for an imaginary BMF belt.

The entertainment value was so irresistible that the UFC granted both wishes.

What happens if a UFC champion refuses to fight the top contender and picks an easy fight?

UFC Fighters have little control over who they fight, much less champions.

A champion cannot refuse to fight the top contender or anybody else without good reason.

The champion can turn down a fight if they’re unable to fight in peak conditions.

In this scenario, the UFC can make an allowance for him to fight when ready.

If the champ is going to be out for an extended period of time, then an interim title will be created.

The no 1 ranked contender will face the no 2 or anyone else the matchmakers feel worthy in a fight for the interim belt.

The winner of this bout will face the champ on his return for reunification.

If a champ is healthy, and able to fight, yet refuses to face the top contender, it is highly unlikely the UFC will permit them to face anybody else, much less an easy fight.

The matchmakers have the final say on who the champion fights.

They will not endorse the champion.

Also, a champ who has blatantly refused to fight the top contender while angling to face someone else could very well be stripped of his title.

Is It Time For Joe Rogan To Step Out As A UFC Commentator?