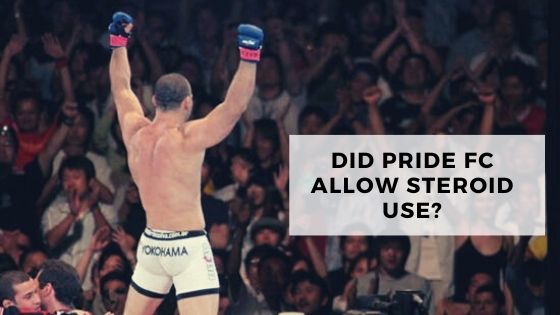 Pride Fighting Championships was the biggest MMA promotion in the world during its timeline from 1997-to 2007.

The days when the Pride Fighting Championship existed are still known as the glory days of MMA. Are steroids the reason for this fame?

Before we judge Pride FC, let’s first understand the historical context of the use of steroids in Pride days

In today’s MMA promotions, steroids are strictly forbidden by Athletic Commissions, which are the regulating entities of MMA.

In the UFC, fighters are tested by USADA all year round so they are not allowed to take any PEDs.

In Pride Fighting Championship, this was not the case. There was no such thing as USADA in Japan at the time.

Therefore in Pride Fighting Championship, no rule said you cannot use steroids. So, during the time the promotion existed, there were no drug tests or restrictions.

Why were steroids allowed in Pride Fighting Championship?

There are many reasons why this promotion allowed steroids. Arguably, the use of drugs made the entire show better.

Since there were no athletic commissions or regulations, the promotion didn’t care about the drugs.

When steroids were in play, the fight was fast-paced, long-lasting, and resulted in exciting fights overall. The fans loved it.

The fighters didn’t mind this either. With a relatively new sport, entertaining the fans was also important. And when both fighters are on PEDs, it is an even playing field.

Did they directly tell its fighters to take steroids? No, but indirectly they were allowed. Recent events clarified these speculations.

On Joe Rogan’s podcast, Pride FC veteran Enson Inoue spoke openly about the matter, he said that there was a clause in fighters’ contracts stating clearly that the organization was not going to test them for steroids.

This was so good. Well done. The Randleman fight story is classic. You may have seen this, but Enson Inoue posted the PRIDE PED clause on FB pic.twitter.com/QY5AMPaKmC

This proves that Pride Fighting League allowed fighters and in a way encouraged them to take steroids.