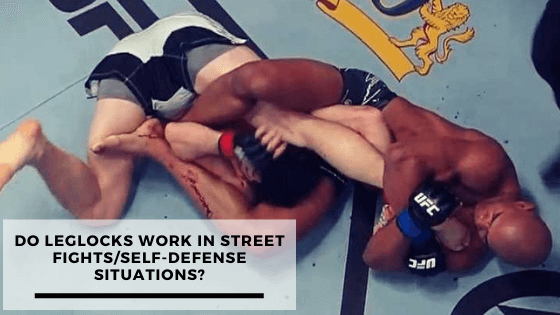 A leg-lock is a submission hold in Brazilian Jiu-Jitsu and other martial arts that targets the legs.

The goal of the move is to either neutralize a key limb or cause them enough pain that they are forced to tap out.

There is debate over the effectiveness of leg-locks in street fights and self-defense situations.

Some people believe that they are too complicated to set up and execute in a real-world situation.

In contrast, others believe that they can be just as effective as arm locks or chokeholds.

Let’s dive a little deeper into the topic by looking at the following pointers:

1. What Are Leglocks, And What Do They Involve

Leg-locks are a submission hold that can be used to subdue an opponent by attacking their leg muscles, tendons, and joints.

Thus, there are many points of attack, such as the hip, knee, ankle, and foot. However, most leg locks target the knee or ankle.

2. The Debate Over Their Effectiveness in a Self-defense Situation

As we have established, leg-locks are a very effective technique in Jiu-Jitsu.

However, do they work in a street fight or self-defense situation?

There are a few things to consider when thinking about this topic:

The first is that there are no rules in a street fight.

This means that eye-gouging, biting, and groin strikes are all fair game.

So, if you’re attempting a leg lock and your opponent is able to reach your eyes or groin, you’re in trouble.

Another thing to consider is that, in a street fight, your opponent’s friend might decide to jump in and help them.

This could spell disaster if you are on the ground attempting to control the person’s leg.

The opponent might have a hidden weapon. This is always a possibility in a street fight.

If your opponent does have a weapon, you’ll want to avoid being on the ground with them.

All of these are valid concerns that need to be considered when thinking about the effectiveness of leg-locks in a street fight or self-defense situation.

That said, leg locking can be a quick way to ensure that you nullify the danger of your opponent coming after you.

The Russians incorporate many leg locking techniques in Sambo.

They have a saying: kill a man, and his body remains on the battlefield, break his leg, and two men have to carry him off the field.

The effectiveness of the leg-lock comes from the fact that when you break someone’s leg, they can no longer stand and are neutralized.

That means they are no longer a threat to you, and you can walk away from the situation.

3. The Pros And Cons Of Using Leglocks In A Fight

Like every technique, leg-locks have their pros and cons.

4. When To Use A Leg-lock In A Self-Defense Situations

A street fight is a dangerous situation where anything can happen.

Because of this, you need to be careful about when and how you use leg locks.

Imagine that multiple people are attacking you.

In that case, it is probably not the best time to attempt a leg-lock.

The same goes for if your opponent has a weapon.

Furthermore, actively looking for an entry into leg locking (Imanari roll) can result in you getting stomped in the face.

However, if you find yourself in a situation where you are being attacked by one person, and you have the opportunity to take the fight to the ground, a leg-lock might be a good option.