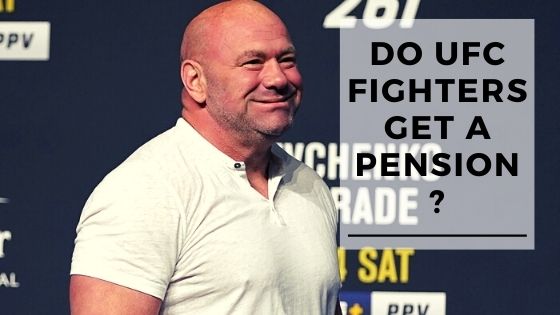 Whether they get it or not, you got to agree that they deserve it. Every UFC fighter puts their life on the line during a fight.

Behind the scenes, they go through hell during the training camp and the weight cut.

A lot of competitors in MMA have mentioned that their medical bills add up to a hefty sum after their retirement. And most of the causes can be connected back to their days inside the cage.

Unless you are a main event draw in the UFC, chances are you won’t make enough out of your time as a fighter to set you up for life. If you are in a less known promotion the pay would be even less.

So does the UFC pay the fighters a pension? The answer is no. At least not yet.

UFC – We are the NFL of MMA!
Except no union.
No collective bargaining.
No fighter input on anti doping.
No pension.
No post career health insurance.
No certified player agents.
No livable entry pay.

But we have a monopoly and make truck loads of profit!
NFL of MMA Baby!

But according to Dana White setting up a pension is not as easy as it sounds.

Almost every job that offers pension plans is used cutting a percentage off their basic salaries while they work and making it available to them once they retire as a pension fund.

MMA is still a growing sport, therefore the revenue that it generates isn’t as big as everyone expects.

Taking UFC as an example, the company has a lot of shareholders. After they get their cut, there is not a lot left for the fighters.

But with the growth that the sport has seen lately, talks about pension funds for fighters have been spreading to every promotion.

The correct response is yes.

But because UFC isn't a sports league and gets away with whatever it wants to get away with when it comes to fighter rights/benefits, we get the president of the organization offering wildly out of touch answers like this. https://t.co/kP1gsacype

Even the UFC held a stakeholder meeting regarding the issue during 2021, which was held by California State Athletic Commission.