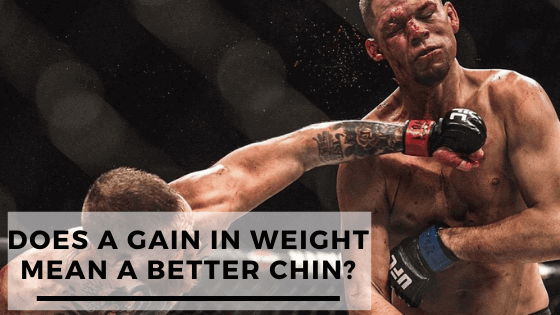 A fighter’s chin refers to their ability to absorb blows to the head without getting knocked out.

A fighter deemed to have a good chin will absorb heavy shots that would compromise most other fighters and shake them off.

A fighter with this ability is said to have an “iron” or “granite” chin.

It is important to the striking aspect of combat sports.

Most great fighters had to have at least a decent chin to succeed.

Elite fighters rely more on skills than their chin, but it helps to be able to take a decent strike cleanly, sometimes even absorbing strikes to set up theirs.

Some fighters with iron chins incorporate it into their fight style, building their game around their ability to withstand punishment.

They are pressure fighters, who rely on high volume striking to overwhelm opponents.

They are confident in their ability to survive the best shots, and so can attack an opponent all night long.

A fighter with a bad chin has a lower tolerance for heavy blows.

They are said to have a “glass jaw” or “suspect chin”. They can easily get compromised by a single punch landing cleanly.

A glass jaw is so unreliable that you see these fighters get knocked out from seemingly harmless strikes.

So then, does a gain in weight mean a better chin?

There is no evidence that gaining weight improves chin durability.

The structure of the question implies that a loss of weight deteriorates a fighter’s chin, but it is more complicated.

The science behind chin durability is not very detailed, but some known factors are genetics, conditioning, skill level, accumulated punishment over a career, and drastic weight cuts.

The effects of weight gain can be seen in an increase/decrease in power, speed, and cardio.

A weight gain will only help improve the chin of a fighter who has previously been draining himself to make weight for the division he fights at.

This then leads us to the next question.

Does cutting weight for a fight give you a glass jaw?

The answer to this is not straightforward.

Yes, cutting weight can affect your ability to take a punch.

But no, cutting weight does not give you a glass jaw.

Most fighters cut weight to fight in their respective divisions.

That does not give them a glass jaw.

The influence weight cutting has on the chin is more dependent on the management and severity of the cut.

Some UFC fighters have shown weaknesses after having bad weight cuts.

Former UFC strawweight champion Joanna Jedrzejczyk lost her belt in a knockout loss to Rose Namajunas. She got knocked down twice and got finished in round 1.

Incidentally or not, Joanna had a bad weight cut prior to the fight that she had to fire her team of nutritionists.

She has fought a few wars since then including the rematch against Rose which she lost by decision, and a 5 round war against then-champion Zhang Weilli, absorbing big shots in each fight.

Her battle with Weilli will go down as the greatest women’s fight ever, and one of the best UFC title fights ever.

Joanna took so much punishment that she finished the fight with a hideous, massive hematoma on her head, yet did not once get knocked down.

Another instance is Darrent Till

Till fights now at middleweight.

His only ever KO loss came at welterweight, where he struggled to make weight, having missed the 170 lbs mark on two separate occasions.

It is said that he walks around at the weight of a light-heavyweight.

A prime example of fighters killing themselves to fight in smaller divisions.

Since moving up to middleweight, he has lost twice in three fights but was able to withstand heavy shots from Whittaker, Gastelum and Brunson.

Can a fighter lose their chin if they go down a weight class?

If a fighter executes a healthy weight cut, then it is unlikely that moving down deteriorates their chin.

As said before, the key element is the severity and execution of the weight cut.

A poorly executed weight cut can leave a fighter drained, weaker, slower, and less aware, which leads to them getting caught clean with heavy shots.

A drained fighter could get hit with a shot they would have normally seen coming.

Or, after getting caught with a shot they could recover from, they are too sluggish to scramble to safety, and so they get swarmed and finished.

A fighter gets knocked out when the head receives a heavy impact that violently shakes the brain inside the skull. It is simply the brain shutting down to avoid more trauma.

The relationship between weight gain/cuts is widely debated, but there are more prominent factors affecting a chin.

The relationship between the chin/jaw area and knockouts is simply that it’s the part of the head that generates the most whiplash to cause trauma to the brain.

Neck structure, head structure, and other intricate genetic factors can dictate a fighter’s resistance to getting knocked out.

There’s a myth in combat sports that Mexican fighters have the most durable chins.

It is clearly easier to knock out a fighter who is tired and struggling for stamina.

Fighters get knocked out late in a fight from strikes they could have shaken off earlier.

Elite strikers like Israel Adesanya and Conor Mcgregor rarely ever get their chin tested.

They rely on superior evasive movement and hardly get caught with clean shots to the head.

These guys are so powerful that they most likely will secure a knockout if they land cleanly.

Sometimes speed and accuracy are just as effective.

The level of opponents one fights can determine how often they get knocked out.

Some fighters are said to have had their chin “cracked”.

Sometimes the punishment withstood by a fighter adds up, and even those with the best chins become unable to handle heavy shots like before.

Some fighters have been known to get knocked out once, and from then on never regained tolerance for heavy strikes.

There are 12 UFC divisions. 8 for men(flyweight – heavyweight), and 4 for women(strawweight – featherweight).

Does Pulling Guard Still Work In MMA Like In The Old Days?

Which Professional Fighters Have Been/Are on Keto?

What Are The Funniest Social Media Accounts For MMA Memes?