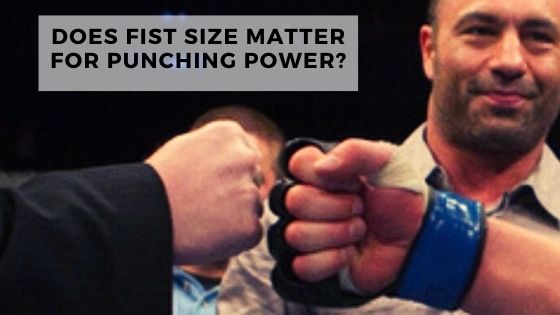 It makes sense to assume that fist size makes a difference. It would hurt much more to get hit by a cannonball rather than a baseball.

Does the same apply when it comes to punching power? Does someone with a big fist hold the edge?

Actually, the size of your fist adds nothing to the power of a punch.

Even if you look at it from a physics perspective, pressure, in this case, the pressure to the opponent’s jaw, is force divided by area.

In reality, the size of the fists cannot affect the power of a punch. Fighters with tiny hands or even massive hands have gone on to be champions. It is not the size that matters but the technique.

What really matters for punch power?

Rather than depending on the size of the fist, there is a lot more going on in a punch. A powerful punch involves your whole body. So where is the power generated for a punch?

The overall stature of the fighter matters. The larger the mass of a fighter, the more weight that drives a punch. This is the mass in the forearm and the triceps.

But being the larger person doesn’t often guarantee you the strongest punch. Most of the power in a punch comes from the core.

1. The core adds to the speed and momentum of a punch. A punch starts at the legs and how you place them when you throw a punch. If you are moving forward or accelerating that will add to the power.

2. Then comes the hips. If you can rotate them along with the punch, the turning of your hips will add to the punch.

3. Similar to the hips the shoulders do a massive amount of work as well. So the technique is key in increasing the power of a punch.

4. Another factor would be the punch itself. A punch with a followthrough will definitely be stronger. This means a hook or an uppercut would be more effective than a jab since it has a better follow-through.