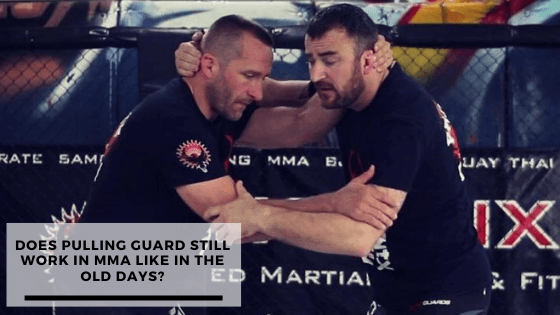 MMA has evolved a great deal over the years.

As new techniques are discovered and perfected, old strategies sometimes fall out of favor.

This is especially true in the world of ground fighting, where guard pulling can be a very risky proposition.

When does pulling guard work, and when does it not work in MMA?

What are the different types of guard pulls and their effectiveness?

That is what we will discuss.

So, does pulling guard still work in MMA?

The answer may surprise you!

1. What Is Pulling Guard?

Before we head into this discussion, guard pulling is the act of lowering oneself to the ground and wrapping one’s legs around an opponent’s waist in order to control them.

You can do this from a standing position or an attempted takedown.

It’s generally considered a bad idea in MMA because it leaves the guard puller vulnerable to strikes from above.

However, that is not the entire truth.

2. How Did Pulling Guard Benefit MMA Fighters In The Old Days?

One of the most significant benefits of pulling guard in MMA is that it allows the fighter to take the fight to the ground, where they may have a significant advantage.

If you are skilled in Brazilian Jiu-Jitsu or wrestling, then you may be able to control and submit your opponent on the ground.

This is especially true if you are fighting someone who is not as skilled in grappling.

One of the most iconic examples of this is when Royce Gracie used his guard to submit opponents in the early days of the UFC.

He used his superior grappling skills to control and submit much larger and stronger opponents.

3. The Biggest Risk Of Pulling Guard In MMA

The biggest risk of pulling guard in MMA is that you may get punched in the face.

When you pull guard, you are essentially giving your opponent a free shot at your head.

And, if they are skilled in striking and getting their hands free, they can do a lot of damage.

Furthermore, if they are competent at Jiu-Jitsu or wrestling, they can pass your guard and rain down some serious punishment or catch you in a submission.

4. Is There Space In Modern MMA For Pulling Guard?

So, does pulling guard still work in MMA?

The answer is yes and no.

As with any technique used in MMA, it all depends on the situation and how you use it.

There are still plenty of examples of fighters using guard pulling to great effect.

However, it is generally considered to be a high-risk, high-reward strategy.

Charles Olivera decides to attempt a takedown and pulls guard on Kevin Lee.

The resulting scramble sees Olivera on the bottom going for a plethora of leg locks, triangle chokes, and getting into better positions.

Olivera eats some hard shots for his troubles.

However, if any of his submission attempts stuck, the fight could’ve been over there.

He says that there are essentially three things you can do in an MMA fight.

He explains that if the opponent is a better striker than you and can stop your takedowns, then the only logical thing to do is pull guard and “make something happen.”

Now that we have answered the question, “Does pulling guard still work in MMA?” let’s take a look at the different types of guard pulls that you can employ in an MMA fight.

To make this move work, you need to shoot deep for a single or double leg takedown.

When you wrap your arms around one, or preferably both, legs of your opponent, they will usually post their hands on the ground to stop you from taking them down.

What you need to do next is to “sit through” and turn to your side so that you are in half guard position.

A key thing to note is to over hook one of your opponent’s legs so they can’t stand back up.

From here, you can work on a variety of sweeps and submissions.

The collar tie guard pull starts from the standing position.

You would close the distance to clinch the opponent and place your hand on the back of their neck. Then you pull them forward and with their posture broken, pull them down to the ground.

You can and should keep the collar tie around the opponent’s head to keep them from posturing up and raining down strikes on you.

The overhook guard pull is a variation of the collar tie.

Instead of placing your hand on the back of the neck, you bring it from the outside and place it on the inside of their shoulder.

This gives you an overhook and allows you to control one of their arms.

The mechanics of pulling the opponent down are the same as with the collar tie guard pull.

However, with the overhooks you control the dangerous arms of your opponent and can set up submissions such as the triangle or the omoplata.

Instead of just controlling one arm with an overhook, you control both arms with double underhooks.

The double underhooks give you a lot of control over the opponent.

Some people argue that is better to go for a wrestling takedown from that position rather than pulling the opponent down to the ground.

The Imanari roll is a technique made famous by Japanese mix martial artist Masakazu Imanari.

It involves dropping down to your opponent’s legs and wrapping them up with your own legs.

The resulting entanglement can lead to a quick submission or the full guard position.

We hope this article has helped you answer the question, “Does pulling guard still work in MMA?”

As you can see from the different types of guard pulls, there are many ways to execute the move and many situations in which it can be useful.

So next time you’re in an MMA fight, be mindful of “the third option!”

ONE FC Vs. UFC (statistics) Who Is Bigger On Social Media?

How Long Should I Train Before My First MMA Fight?