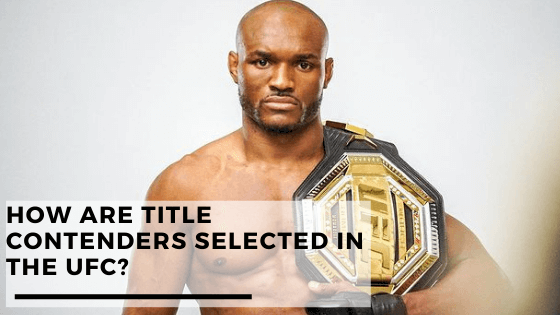 The UFC divisional structure revolves around their official fighter rankings.

These rankings determine who the top 15 fighters are, according to votes from a selection of MMA media members.

Normally, UFC matchups should be made based on the rankings, and the top 5 are referred to as title contenders.

A title contender is best defined as a fighter who is 1-2 fights away from getting a shot at the title.

And to be selected for title contention, a fighter will have to be in around the top end of the rankings.

The surest way to move up the rankings and into title contention is by winning fights against higher-ranked opponents.

A fighter who defeats a higher-ranked opponent, replaces them on the rankings, while the loser drops one spot or a few.

The result is that he has leapfrogged the rest of the top 10, now sitting at #2 while Burns drops to #4.

Numerous factors affect one’s chances of getting into title contention and earning a title shot.

Having popularity, a marketable personality, impressive fight stats, or an exciting fight style can contribute to a speedy rise up the rankings.

How are UFC title fights decided? How do fighters get title shots?

Ideally, the # 1 ranked fighter is entitled to a title shot, then after him the # 2, and so on.

The highest-ranked fighter should fight for the title, with preference going to those who haven’t already lost to the champion.

However, in reality, it is not quite a straight line.

Various circumstances can influence who gets to fight for a title.

It could be availability, breakdown in negotiations, win streaks, undefeated records, popularity, marketability, and a few more.

The UFC is a promotional organization and is under no obligation to adhere to the rankings.

Their priority is to sell the most exciting fights possible, to generate the most revenue.

While there may be a blueprint to earning a title shot, there are no rigid rules to actually getting one.

To earn a title shot, a fighter has to rise to the top of the rankings, defeating every opponent set on their path, maintaining activity, and impressive performances.

However, in getting the shot, we’ve many times seen fighters leapfrog the line.

Some notable criteria that get fighter title shots are:

This means organizing the most commercially appealing fights possible, to the widest audience.

This means fighters with huge followings and popularity get privileges over others.

More and more often, fighters try to start rivalries with the champion and trash talk their way into a title fight. Sometimes it works.

A fighter can also be propelled to a title fight based on the belief that they’re an exciting stylistic matchup for the champion.

A fighter with an impressive win streak enters into the title conversation despite not being a top contender.

People talk about you when you’re difficult to beat, and the UFC favors fighters that people are talking about.

A perfect record carries a lot of stock.

The hype built around an undefeated fighter is unique because they can be sold as invincible.

Israel Adesanya, Darren Till, and Paulo Costa all benefited from this.

this also plays a huge role in propelling fighters to title shots.

Brock Lesnar was a massive crossover signing from the WWE to UFC and was given a title shot in his third fight, even though he lost the second.

The most common factor behind unearned title shots is being available when the opportunity arises.

Al Iaquinta fought Khabib for the vacant lightweight title while ranked #10 because Interim champion Tony Ferguson had pulled out with injury.

And replacement Max Holloway was not cleared to fight due to a horrible weight cut. (Iaquinta missed weight and was ineligible to win the title).

Another instance where the rankings are bypassed is a case of the champion having “cleaned out the division’.

This means they have already beaten most of the top contenders, and are hungry for new challenges.

Are UFC matchmakers biased when they choose title contenders?

If the UFC thinks a fighter will make a better spectacle against the champion, they have no qualms lumping them in there ahead of more deserving contenders.

This could be because they feel the fight is a better stylistic matchup for viewers, or simply because the challenger is a favorite who has talked their way into a title shot.

At a time when the middleweight division was stacked with top contenders like Ronald Souza, Robert Whittaker, and Yoel Romero.

A 46-year-old Dan Henderson was given a title shot against Michael Bisping, ranked #14 and coming off a win against unranked Hector Lombardo.

After this defense, Bisping went on to face Georges St Pierre, who walked straight into a title shot after 4 years of retirement.

Favorites and former champions like Conor Mcgregor, Max Holloway, and Jose Aldo, are always 2-3 wins away from a title shot, in any division of their choosing.