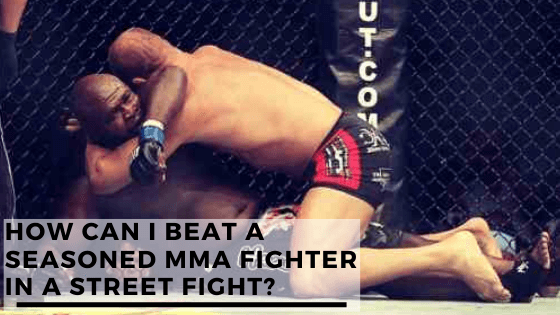 First things first, I would not suggest streetfighting anyone, let alone a trained fighter.

Street fighting is both illegal and dangerous, and if it is at all possible, you should avoid this situation.

If for some reason you are unable to avoid fighting a trained combatant, here are five tips to not only get you out alive but to give you the upper hand.

A fight is inevitable, so what do you do?

Hit first! If you are lucky, one hit can take down your opponent.

Use the element of surprise to hit first and get out of the situation before you get injured.

The most important note here is to strike hard.

If this interaction has come to blows, then don’t hold back with this first punch, end the fight decisively from the beginning.

Okay, so you know you need to strike first, but where to hit?

While it might not be the most heroic move you can make, you don’t have to fight fair in a streetfight.

Plus, if you punch someone in the skull you will probably break your hand.

Soft spots hurt them worse and hurt you less.

Keep your fists in front of your face, and your elbows tucked around your midsection.

Your opponent will be aiming for your face and stomach almost 100% of the time, so keep those spots defended with a classic guard.

Getting hit in the arm (your guard) will still hurt, and it does not offer 100% protection, so if they go for a low blow don’t drop your guard.

A trained fighter will know ground techniques that you simply cannot counter as an untrained combatant.

If your opponent brings you to the ground, you will be in a MUCH worse situation than you were in while trading blows upright.

If you can continue to strike from a standing position, you have a much higher chance of success than if they get you into an armbar or a chokehold.

Specifically, something long enough to keep your attacker at a distance.

If you can hit them without them being able to reach you, you will be less likely to take damage and be more able to dish it out.

Anything long and solid should be able to do the trick, but be careful with this method, as it can lead to serious injury.

Again, streetfighting is illegal and dangerous.

Do whatever you can to avoid a confrontation that leads to blows.

However, if you find yourself toe to toe against a trained fighter, you can use these methods to keep you as safe as possible and to give you the highest likelihood of victory.