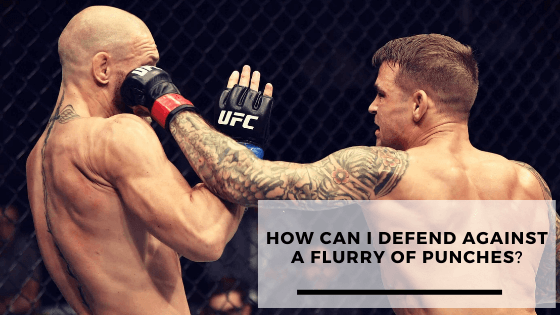 Well, if you’ve ever wondered and thought to yourself, what can I do if I’m faced with a fighter throwing numerous punches at me in quick succession?

Or you’ve ever been in such a position and gotten beaten to a pulp and you’re looking to know how to defend yourself better if such a situation arises again, then look no further; because today we’ll be talking about ways in which you can defend against a flurry of punches.

Whether you’re a professional or amateur combat athlete, or just someone who wants to defend himself better, you will be learning a lot from these tips that are about to be shared.

N.B: Constant practice on some of these tips will aid you to become more familiar with it, so that when you’re confronted with such a scenario, it almost becomes second nature to you.

WAYS I CAN DEFEND AGAINST A FLURRY OF PUNCHES

Easily the most effective way to defend against a flurry of punches is to close the distance with the opponent.

You’re up against someone who is throwing multiple combinations at you, if you stand at a distance, you will keep getting picked apart, so what do you do?

You charge at the person and try to take some level of control of his hands by clinching.

By doing this, you’re able to prevent the person from punching you more, and at the same time, it opens the possibility of creating wrestling situations where you can take the fight to the ground.

The opposite of the first point is maintaining more distance.

We have already examined how closing the distance can nullify situations when you are faced with multiple punches, but what about maintaining more distance.

You should know that the only way a fighter can continually hit you with punches is if you’re within range, so by sliding out of range .i.e moving backwards, the threat of incoming strikes becomes nullified.

In the event that you’re fighting in a cage or an enclosed space, just moving backward will definitely not be enough; this is where lateral and sideways movements come into play.

By circling your opponent, it’ll increase the chances of the punches missing, which will in turn make the fighter more and more fatigued, which will, in turn, be to your advantage.

Parrying punches involves guiding the punches of your opponent with small pushes of your hand.

If the opponent is coming with a straight punch, the logical thing in a fight would be to parry the punch inside, by doing so, you’re moving to the outside.

But if it’s a curved or looping punch, you parry the punch on the outside.

This method of defending against a flurry of attacks will only work if you have some level of experience in combat training, if you don’t, then the above two will be your best bet

So that’s where will be leaving for today, so unless you’re an Anderson Silva, or a Conor McGregor that can stay in the pocket and dodge a flurry of punches coming your way with just head movement (if you were, you have no business reading this), then the above ways of defending will come in very handy for you.