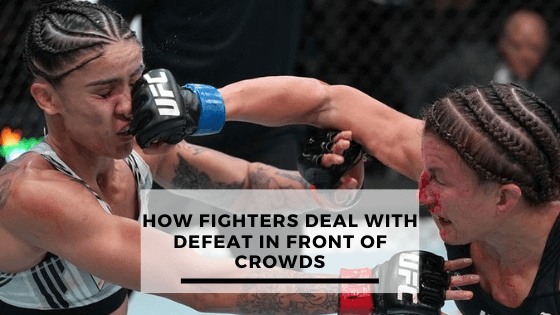 You’ve just received blow after blow to your body and your head, with blood running down your face; and in front of the lights, it’s announced that you have officially lost the fight, in front of thousands and millions of people all over the world.

Well, that’s what fighters go through after every defeat.

Dealing with this takes a lot from the fighters, which is why we’ll be taking a look into some of the ways fighters deal with losses.

How do fighters cope with the embarrassment?

Before we delve into it, you should know that these tips don’t generally apply to all fighters because individuals are different, but from our informed consensus, these are the most applicable;

Be prepared for it

While this might sound easy on the surface, it is extremely difficult because it is practically impossible to replicate the exact scenario; the pain, the camera lights, the crowd.

But if the fighters are mentally prepared for defeat before the fight itself, then dealing with embarrassment after becomes less daunting.

Fixating their mind on something else

In the heat of the moment, finding something else to think about, other than the fact that you just lost seems improbable, but fighters use it to deal with situations like that.

Thinking about a previous victory, the moment your wife gave birth or anything that can act as a temporary happy mental escape will help fighters in dealing with it.

Remembering who they are and what they do

Fighting in a cage, or a ring as the case may be is one of the most difficult things any athlete can do; the intense training camps, gruesome weight cuts, then round after round of intense war are just but a few of the hurdles they overcome.

The fighter should feel a sense of achievement in getting through all that, and he/she will realise that losing is not something to be embarrassed about, instead, the fighter should be proud of the effort put in, because only a select per cent of humans will be able to go through such.

Regardless of how tough they may seem, fighters are humans and they feel emotions and it won’t be out of place for a fighter to even cry on camera after defeat.

Last on our list is the aspect of sportsmanship.

This is perhaps the most important way by which fighters handle defeat.

At the end of any fight, it’s paramount for each fighter to remember that it is a sport, and there must be a winner and a loser.

A fighter could deal with the pain and embarrassment of losing by being happy and courteous towards his opponent.

Even worse than losing in front of millions, is being a bad loser.

So this is where we leave it for today, professional fighters handling the embarrassment of a defeat in front of thousands and millions of people, including your family isn’t easy, even in the slightest; but through making use of the above points, they can get through those moments and come back stronger.