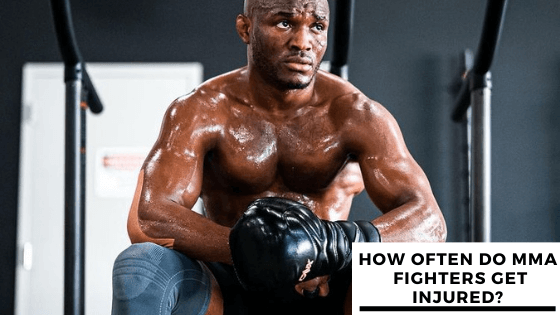 It wouldn’t be a complete year in the world of MMA if there weren’t numerous high-profile fights called off due to injuries.

As frustrating as it might be for fight fans, it happens, so to help ease this frustration, we’ll be talking about some of the most common injuries in MMA, and how often they occur; in training camps, or otherwise.

These are arguably the most frequently injured parts of any MMA fighter, because of their usage.

Dominick Cruz, one of the UFC’s best fighters has been plagued with a series of knee and shoulder injuries throughout his career.

Even the likes of Kamaru Usman and Francis Ngannou have had recurring knee injuries over the years.

Fractures are simply broken bones; whether full or partial.

In the course of training, or fights, the fighter spends a lot of time defending hits or taking them.

A fracture could be in the hand, feet, eye, etc.

A fighter could be trying to block a shot from an opponent and end up breaking his hand, or in training sessions even.

Take Kamaru Usman for example, he had to pull out of his fight with Leon Edwards because of a recurring fracture to his hand that occurred in training camp.

In the world of fighting, a concussion is inevitable, you are constantly taking punches, kicks, knees, elbows to the head, which will eventually lead to concussions.

While there aren’t a lot of fighters who have openly pulled out of fights due to concussions, a lot of them do under the guise of an “undisclosed injury”.

You should know that these 3 aren’t the only injuries fighters suffer in training camps or fights.

But when you hear of a fighter suffering an injury in camp, then more often than not, it’s between the injuries aforementioned above.

Now that we have taken a look at some of the more common MMA injuries, let us now examine how often fighters get injured.

How often do fighters get injured?

If you are here looking for a definite answer, then I’m sorry to disappoint you because there is no definite and defined way of measuring how often fighters get injured; the truth is, fighters differ.

Say what you may about Dominic Cruz’s skill set and legacy in the UFC bantamweight division, you can’t take away from the fact that this greatness has been marred by a succession of knee injuries over the years.

On the other end of the spectrum is someone like Israel Adesanya, or Jon Jones, both of whom have very few injury problems when compared to other fighters.

So the answer to the question varies, some fighters might have injuries as much as 3 times a year.

While others may not even have injuries at all, it all depends on the fighter’s body, previous fights, training regimes, Et Al.

In recent times, there has been a lot of talk and controversy regarding the increasing frequency of injuries, especially during training camps.

While the source of this can be attributed to several factors including; overtraining on the parts of fighters, or poor training equipment, whatever it may be.

it is obvious that this is something that is increasingly harming the sport, so effort has to be made, by the fighters, coaches, and even the promotions, to curtail this negative trend of training injuries.