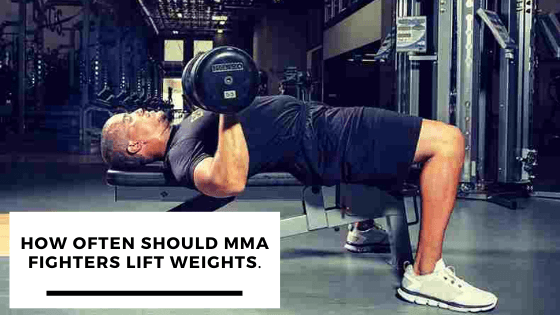 Weightlifting or strength training is an important facet of any athlete’s exercise and training regimen.

The importance of strength training to the athlete is wide and vast, as it reduces the risk of injuries, improves explosiveness and conditioning and aids in reducing body fat composition.

For Mixed Martial Artists, these advantages are even more pronounced with the inclusion of an increase in the power of strikes; this makes weightlifting a really important aspect of any fighter’s training camp.

So in this article, we’ll be taking a look at some of the importance of lifting weights, the right way to lift, the disadvantages of over lifting, as well as some other factors that relate to weightlifting for an MMA athlete.

Why do MMA fighters lift weights?

Fighters lift weights during training camps for a host of reasons:

It helps reduce the risk of having injuries before and during fights, Increases explosiveness and power, and aids conditioning during fights.

For example, take a 185-pound fighter who doesn’t lift at all. After his first grappling exchange in a fight against someone in this weight class, he will most likely have nothing left in the tank, this is because he’s not used to lifting something that heavy, as he would be if he did strength training consistently.

His strength and conditioning routine is one of the most demanding you’re likely to ever come across, and it paid off, as he was able to run through other heavyweights on his way to UFC gold with relative ease.

Does lifting weights have side effects on fighters?

Yes, it does; more weightlifting means more muscle mass, this means that while you might be a lot stronger, you’re most likely to be slower because of the extra weight you’re carrying.

And if this speed difference isn’t noticeable, your cardio will suffer, because of the additional muscle.

It’s no surprise that fighters like Max Holloway, Tony Ferguson, Israel Adesanya are relatively very skinny in their weight classes and can maintain a high pace throughout the fight.

While more muscular ones like Paulo Costa, Kevin Lee, and the aforementioned Brock Lesnar all tend to slow down and tire a lot quicker.

There is no general rulebook that all fighters follow with regard to weightlifting.

It depends on a variety of factors; their weight class, how close they are to fights, their physical goals, coach instructions Et Al.

How does the coach influence how much a fighter lifts?

Greg Jackson, an MMA trainer who has been responsible for training the likes of Jon Jones, George st Pierre, and Holly Holm puts a lot of emphasis on weightlifting to increase explosiveness and speed.

As opposed to just strength because a lot of clinch scenarios in fights require the fighter to be explosive.

Doing these explosive exercises consistently will in turn increase strength.

How often should a fighter lift weights?

Greg Jackson believes that two to three sessions a week, of an hour each, will help combat overtraining.

While still giving room for the fighter to focus on honing their other attributes and ensure proper recovery.

It’s important to note that the above regimens don’t apply to all fighters, some fighters might do a lot more lifting, while some do far less, to good effects also.

But when 3 former UFC champions have used it to great success, it seems like the most optimum way of strength and movement training.

Is weightlifting important for fighters?

Yes, it is; but it must be combined with other explosive activities and the right amount of recovery to achieve optimum performance for fights.

How Much Do MMA Managers Make?

Does Pulling Guard Count as a Takedown in the UFC?