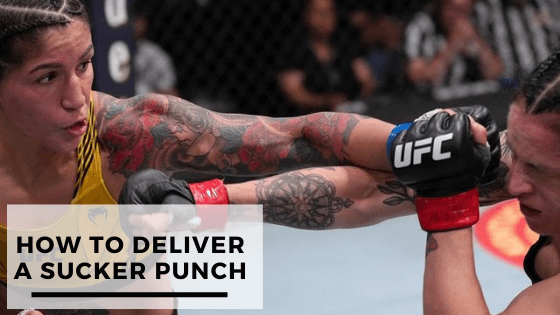 The Sucker punch, otherwise known as the dog shot or coward punch, is a somewhat unethical shot to an opponent that isn’t expecting such a hit.

It is regarded as unethical because the shot is done in such a way that doesn’t allow the recipient to be prepared in any way or form, which reduces the chances of retaliation.

As weird as it may sound, there is an art and purpose to fighting; sucker-punching defeats that purpose, which is why it has a lot of negative PR among large sections of the fighting community.

But regardless of this, it is still an effective way of getting even in a street fight, or maybe you are looking at teaching someone a lesson for previous wrongdoing.

So while there is no definite situation that warrants sucker punching someone in a street fight or a ring or cage, you could be excused from a public backlash if it’s against a bigger opponent that continuously bullies you or a person who has wronged you in the past.

So if you’ve ever been bullied or you are currently being bullied, or you want to take revenge on someone, here are some steps which you can take to sucker punch someone and take some level of revenge.

Assessing your opponent is by far the most crucial step when you want to sucker punch someone, by this, we mean observing his outlook, his current environment, whether he/she has any friends around, or if the person is armed.

The last thing you want to do, is trying to sucker punch someone among their friends, or when the person seems on their guard, you want to make sure that they’re carrying a relaxed demeanor, and they are alone.

Now that you’re done assessing the person you want to hit, in the same vein; you scan the environment.

Critical questions to ask yourself when doing this are; “are there any escape routes?”, “are any law enforcement agents in the vicinity?”, “will punching this guy create a huge scene”.

If your answers to any of the above questions will impede your progress, then you should reconsider your course of action.

Now, while you might be able to sneak up on your opponent from behind or catch him unawares, it is unadvised.

This is because his body position might be wrong, or not suit the angle you’re attacking from, rendering the punch ineffective.

You want to try to get him/her off their guard while being within punching distance.

For example; he walks out of the club looking at the phone in his hand, you walk up to him, greet him nicely and ask for the time.

In doing this, you have created a false sense of security in his mind, making him vulnerable.

By the time he looks at his phone to check the time and looks right back at you, his chin and body are in a perfect position.

Now that you’re sure that no friend or law enforcement agent is around, and there is an escape route for you to make a quick getaway; while the person is looking at his phone screen to check the time, then you strike.

You clench your fist as hard as you can, with your thumb tucked just under your middle finger, and you swing for his jaw.

There’s a popular saying that it’s the punch you don’t see coming that hurts the most, well that will certainly be the case here.

While you might be tempted to continue punching, you have to remember that an extended stay in the vicinity is bad news for you, so you’ll need to get out of there as soon as possible.

So that’s where we’ll be leaving it for today.

On a side note, you should know that sucker-punching is highly dangerous and illegal, and if you’re caught by the person you punched, or the police, the consequences are severe.

In situations where you are being bullied by someone, your first option should be to report to the police.

But if you feel like you can handle the consequences and the risks involved, then why not?

Follow the steps above and go show that person a taste of their own medicine.