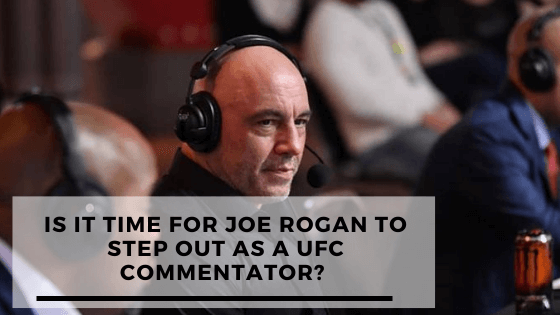 The controversial commentator is one of the most famous people which have a connection with the MMA business.

He has been finger-pointed, judged, and slandered, but nevertheless, he still is one of the iconic voices of UFC.

No doubt we get a sentimental feeling when we speak about Joe Rogan because we are used to him being in the corner next to the octagon.

But how much of his work is done as it should have over the last period?

On his debut back in 2002, on his first commentary, he said “this is a very exciting sport for me, this is like Christmas, my birthday, New Year, April fools, whatever, I can’t wait for this fights”.

You can hear and see on his face his excitement about being part of this and you could have seen the passion that he had for this sport.

His comments were professional, exciting, and emotional.

You could’ve hear his excitement and enjoyment in his way of speaking and narrating.

Is this passion and love for the work still present?

As we are all aware, due to a controversy that he had, he was not present as a commentator on the UFC 271 event.

But due to a huge reaction from the public – he was brought back on UFC 272.

But was this the correct action?

Does Joe still have what it takes to be in the commentary booth of the UFC?

On UFC 272, he genuinely failed to pronounce correctly the names of some of the main UFC names on the list for the event.

“The next fight takes place in the light heavyweight division Nicolae – a pause of 5 seconds and then finally – Negumereanu”, does not sound good, right?

And if it was not enough, after the Umar Nurmagomedov fight, he totally failed to pronounce his name – “Umar Nugame… Nugameuaoeao ladies and gentlemen”.

Joe, we know that you can do better than this.

Please do your research and learn how to pronounce the fighter’s names before attempting to do it in public.

You’ve done it in the past.

From what can be noticed, Joe’s commentary is getting worse.

In any case, the deterioration is evident during the last year or two.

Over his career he has been ‘caught’ dancing on camera, not aware that he is being filmed, he pushed away forcefully a guy who entered the screen… the list goes on.

However, regarding the commentary style that Joe has, we can say that even though it is ‘old-fashioned’ it is still attractive and the UFC fans are still reacting positively to it.

As Michael Bisping said, Joe Rogan is the godfather of MMA commentary.

We can elaborate on this topic as much as we want, but one cannot be so sure that there is a potential talent who can replace Joe as a commentary at the moment.

It is not about the commentary part of the job only – that is the ‘easy’ part.

There were better commentators than Joe in terms of knowledge and research.

He was brilliant as a commentator.

He never insulted, or brought ‘down’ any fighter, and was completely professional and exciting to hear.

However, he did not have the controversy and the fame that Joe Rogan has – and with that, he did not attract the attention of the public as Joe does.

Frank Trigg, had an extraordinary knowledge of the sport and was part of it himself for a long time.

He was an excellent commentator.

UFC is a multibillion-dollar business.

And in business money comes first.

I don’t think that Dana White can allow himself to lose the fame and attention that Joe brings to the UFC.

However, we do all agree that he should start looking for a commentator that might be worth replacing Joe.

Potential replacements would be Brian Stann, Todd Grisham and I sure bet that we’d all want to hear McGregor there.

Brian Stann might be the one who is the most professional of all the above.

Todd Grisham has made his name in the WWE and Glory Kickboxing, so he is not new to the profession.

And for Connor, if not something else, he does have the publicity and controversy on a similar level as Joe.

Is there anyone who can replace Joe? Probably yes. It’s just that maybe this is not the time to do so.

What Are The Most Commonly Used Steroids By MMA Fighters?

How To Deliver A Sucker Punch?