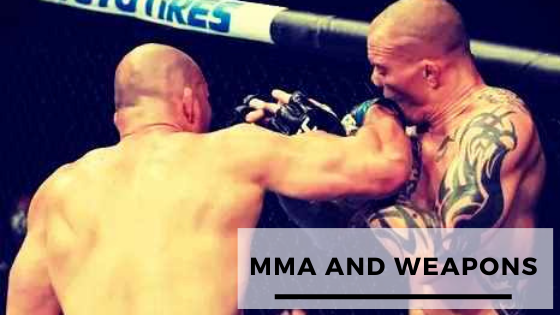 Mixed martial arts is a full-contact sport that incorporates techniques of all kinds of unarmed combat sports.

MMA allows for a wide range of fighting styles, from punching to kicking to knees, elbows, grappling, and submissions.

Referred to as ultimate fighting, it is based on using the human body as a weapon.

MMA does not involve the use of weapons.

The goal of MMA is to achieve the peak of human fighting ability.

In this article, we will discuss MMA techniques and their role in self-defense in real-life situations.

As mentioned above, MMA is a combat sport that combines the best techniques from all the other combat sports. It is the ultimate art of fighting.

In the early days, MMA was created to pit fighters from different disciplines against each other to determine the best fighting style.

However, as the sport evolved, fighters began adapting, maxing out their skills in different areas to become the well-rounded ultimate fighter.

While in the early days, a BJJ guy was just that, a BJJ guy trying to prove his martial art was superior to that of his opponent.

Nowadays, a BJJ specialist in MMA also spends significant hours of his life training in boxing, wrestling, muay Thai and other disciplines.

Unlike boxing where a knocked down fighter is given 10 seconds to recover, wrestling where strikes or submissions are prohibited, or kickboxing where there’s no grappling allowed, you are allowed to do virtually everything in MMA.

Of course, there are rules, but these rules are only in place to avoid life-threatening or career-ending injuries.

Unlike the early days, fighters are no longer permitted to throw kicks and knees to the head of opponents on the ground, gouge eyes, pull hair, headbutt or bite the opponent, or attack the throat and groin.

They are also banned from using performance-enhancing drugs and are required to wear gloves and mouth guards.

MMA is arguably the best form of unarmed self-defense training, putting you at peak

physical and mental condition to protect yourself in most situations.

Does MMA teach how to defend against weapon attacks?

It is not advisable to engage people bearing weapons unless you absolutely have no choice.

Regardless of your level of training, the wielder of a weapon will always be at an advantage.

A fight involving a weapon is a matter of life and death and should be disengaged from as quickly as possible.

Either by de-escalating the situation through dialogue or by fleeing the scene of the confrontation.

A slip in a fight against an armed opponent can end with you bleeding and incapacitated and on the road to death, as opposed to a first fight where you’re worried about eating a jab or a hook.

How Can I Beat a Seasoned MMA Fighter In A Street Fight?

What Are The Risks Of Doing An Armbar In A Street Fight?

Can A Lightweight MMA Fighter Beat A Heavyweight?