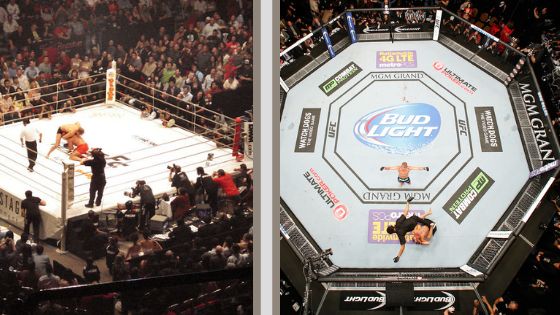 The MMA cage vs. ring debate amongst fans of combat sports has gone on for many, many years.

The arguments for either of these fighting stages are usually based on how much they impact the fights and which one of the stages would be best suited for a particular combat sport.

The ring is the traditional area in which modern and legalized fighting has been carried out, while the cage, despite not being as widely accepted, is perhaps the more historic of the two stages.

What are the advantages and disadvantages of MMA in a ring?

Both the MMA cage and the boxing ring as fighting areas possess their merits and demerits that cut across a number of criteria.

Advantages of the Ring

The boxing ring has been the choice stage for hosting combat sports for many centuries. It gives whatever sport (boxing, kickboxing, Muay Thai) that is being hosted on it instant recognizability amongst new fans or neutral viewers.

For camera angles and onlooking fans or live viewers of a sport, the boxing ring gives a clear view of the fight action. The only hindrances to one’s vision are the ropes that act as a barrier around the ring, and even they are spaced widely apart enough not to present any viewing trouble.

The ropes which act as boundaries around a boxing ring are not so rigid as the wall or fence in an MMA cage. This allows fighters to be able to move freely without being stuck.

Disadvantages of the Ring

While it may be completely safe for two boxers or kickboxers to have a go at it in the boxing ring, for mixed martial arts fights that combine striking and grappling, the fighters are at risk of falling right through the ropes if the action gets that chaotic.

The raised platform of the ring presents a huge safety issue for a fighter that’s unlucky enough to fall down the ring.

The design of the boxing ring does not only present safety issues for MMA fighters, but it also presents a few problems for how the fights themselves are conducted.

One of the problems that early promotions faced was that opponents would usually just crawl out of the ring to escape submission attempts, and the fight would then have to be restarted.

The 90-degree angle of the ring also made it easier for the boxers and kickboxers to cut off fighters easily at the corners, hence making it apparent that the ring favored strikers over grapplers.

What are the advantages and disadvantages of the MMA Cage?

Advantages of the MMA cage

The wall or fence that covers the entire circumference of an MMA cage solves the safety issues that are presented in a boxing ring. A fighter cannot fall off or through the stage in an MMA cage.

The cage presents another aspect to fighting that cannot be found in a boxing ring, which is fighting with the fence as another surface.

Grinding opponents against the fence and wearing them down, and using the cage to produce inventive strikes (José Aldo superman punch vs. Frankie Edgar) is another dimension of fighting that truly encompasses what mixed martial arts is.

The wide angles of the cage, in terms of the hexagonal or octagonal ones, also allow for better movement and footwork. Fighters cannot just be trapped and pinned in a corner of the ring.

Disadvantages of the MMA cage

Perhaps the biggest complaint that fans have about the cage as a fighting area is the act of “wall stalling” by fighters. This is when a fighter presses his opponent against the fence and holds him there, wearing him down.

Although this is a solid move that counts towards that fighter’s points for controlling the fight, it is also one of the boring aspects of fights that fans don’t like to see.

The total roundabout fence design of the cage makes camera filming and live viewing a bit harder to carry out.

Although the boxing ring has been the choice stage for hating combat sports for many centuries, the MMA cage has presented itself as a modern and effective alternative, especially for mixed martial arts.

And it is right up there as one of the most important changes that made MMA into the global sport it is today.

What is the history of the (Boxing) Ring?

The name “ring” is something that has been coined and accepted as a term to refer to a boxing stage, even though the dimensions are square.

It can be traced back to when contests were fought in a roughly drawn circle on the ground. The first square boxing ring was introduced in 1838, and it measured 24 feet(7.3m) on each side.

Modern boxing rings are slightly smaller, and advancements have been made in the construction materials to improve safety and to provide a better, more durable fighting environment.

What are the dimensions and designs of the boxing ring?

The landing surface is covered by about an inch of padding topped by a stretched canvas. The ring is bounded by four ropes on each side of the square that serve as perimeter guides. The ropes are also covered with thick padding.

The boxing ring is suited to host several combat sports including boxing, kickboxing, Muay Thai, and even MMA.

What is the history of the MMA cage?

Cage fighting and mixed martial arts can be traced as far back as ancient Greece although the sport only became global and standardized in the last few decades.

The demands of mixed martial arts made fighting in a ring impracticable in many ways and innovations were sought.

The legendary Gracie family is responsible for helping MMA become what it is today, and their contributions to the adoption of a fighting cage can be said to have played a massive role in the growth of the sport.

Rorion Gracie and John Milius, a screenwriter and one of Rorion’s students at the time, are credited with the idea of using an octagon-shaped enclosure that would fix the problems that the traditional rings presented, and also present a street fighting aesthetic that was expected to captivate and draw viewers in.

The Octagon was premiered in UFC 1 in 1993, and it would go on to spark a wide range of adoption of the cage as the new MMA fighting stage for many promotions.

What are the dimensions and design of the MMA cage?

A smaller octagon measures 25ft (7.62m) in diameter. MMA cages could be hexagonal or even circular (as in Bellator) in design.

The cage is surrounded by a plastic-coated fence to prevent fighters from falling out as is usually the case when fighting in a ring. The wide angles of the octagon (135 degrees) as opposed to the more acute 90-degree angles of boxing rings, also hold great importance in the design choice for MMA cages.