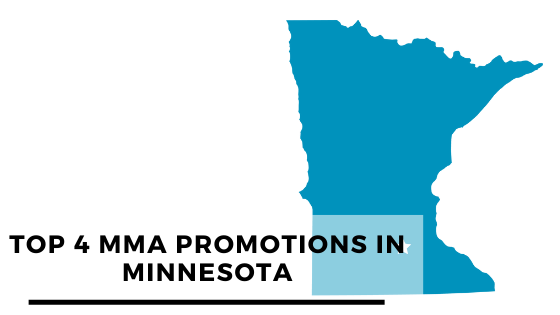 Specializing in organizing MMA events, this Minnesota-based organization has organized more than 45 events since 2001.

Re-introduced by Brock Larson, this organization in 2021 has made the biggest come-back on the MMA organization lists from the Minnesota area.

With more than 45 events organized, the experience of arranging MMA events is on CFX ‘s side.

After a pause of 8 years, this organization made its comeback by organizing the CFX 49 event that took place on the 28th of August last year.

No need to tell more, out of eight bouts, seven finished in the first round.

The brutality of the fights and the eagerness of the fighters to finish their opponents as fast as possible made this one of the bloodiest and most brutal events organized in this area.

Ignite Fights, based in Alexandria, Minnesota is in business since 2009 under a different name – Driller Promotions.

The organization is specialized in organizing MMA, boxing, and Muay Thai events.

Until now several events have been organized by them in different disciplines.

The Brawl @Bourbon Street, Ignite Evolution, and the A-Town Throwdown event are MMA events that are organized 3 times per year and until now the main events have been an exciting experience for MMA fans.

The KO with a head kick by Sam Hernandez at the Evolution 1 event and the submission by guillotine choke delivered by Zak Ottow at the A-Town Throwdown event are a show-maker and definite messengers to the open world for the quality of the events.

You can watch Ignite Fights on online streams.

Top-notch takedowns, powerful fists, brutal knockouts, adrenaline rushing through you – all of this is available with the Driller promotions organized fights.

The promotion has organized more than 70 fights all over Minnesota.

The No Mercy events and the Mecca events will certainly fulfill your expectations from a first-grade MMA event.

Throne MMA is an organization also based in Alexandria, Minnesota, and is founded and co-owned by Dean Lamb.

Formerly known as North Star Championship, this organization was organizing fights since 2011.

In 2021 the name of the organization was changed from North Star Championship to Throne MMA.

And since then they’ve organized 2 mixed martial arts events:

Both events were held at the Northern Lights Casino and featured local amateur fighters.

The main event of Throne MMA 1 was promising and ended in a bloody TKO.

However, the main event of Throne MMA 2 has been removed from the card due to one of the fighters not showing up for the weigh-ins.

This was labeled as unprofessional and disappointing, however, the fight was replaced with a different set of fighters and ended by submission in 1st round.

You can watch the thrilling fights of Throne MMA on CombatGoTV, PlutoTvUK, Etisalat UAE, and JungoPlus.