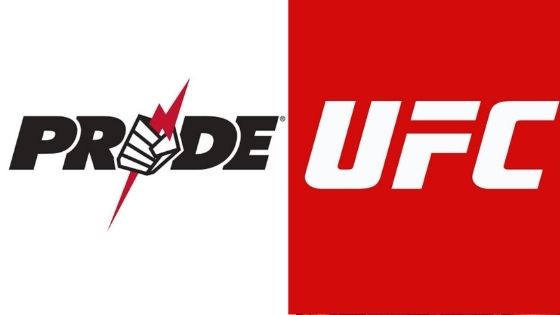 Fighters who stalled in Pride FC through means such as clinch-work, wrestling (lay and pray) those who simply ran away from their opponents throughout the fight were given yellow cards which amounted to them losing 10% of their fight purse.

Pride FC allowed fighters to make entrances with huge lights and fireworks. One cannot deny that these things really made the fighters feel special.

In the UFC, the fighters only get a walk-out music and this cannot be compared to the dope grand entrances fighters in Pride got.

The fact that Pride FC only had a few cards every year, unlike the UFC having 3-4 cards every month, allowed for more quality fight cards and if you were a fan of MMA during Pride days, these Pride events built up more excitement.

Every Pride event felt like something huge was about to go down, so it was a no-miss.

The smaller roaster of Pride FC made it possible for the best fighters to be matched up more frequently against each other. This is dissimilar to the UFC where the majority of the fighters are largely unknown.

Also, not to forget the open-weight matchups which allowed for the most intriguing fights. In the UFC, such fights are not frequent.

One thing Pride definitely had better than the UFC is the live audience. The Japanese audience was definitely more intelligent.

Unlike in the UFC where fighters are usually booed during grappling exchanges, the Japanese fans never booed fighters, applauded during transitions, and definitely, there were no chants of ‘USA!’  which we get every time in the UFC.

Pride FC had some differences when it came to the rules and many would agree that these rules should be brought back.

Rules such as soccer kicks and foot stomps were allowed in Pride and these rules definitely made these fights more interesting.

These rules discouraged wrestlers from stalling and added the element of brutality to these fights. These rules also made Pride fights appear more alike to street fights than what is gotten in the UFC.

The judging system pride employed was way better than the system used by the UFC. In Pride, damage and domination were emphasized, unlike in the UFC where control time and takedowns can easily win you a round even if the opponent caused the most damage.

Pride FC system of judging allowed for more fun fights rather than the snooze fests we have from time to time in the UFC.

It is true that the UFC fighters are tested for the use of steroids and performing-enhancing drugs, however, some fighters cheat the testing body (USADA) and are too smart for these tests.

In Pride, fighters were allowed to use (even encouraged) performing-enhancing drugs.

This definitely created a level playing field since everyone was on steroids, not like in the UFC where some cheat their way around the rules.