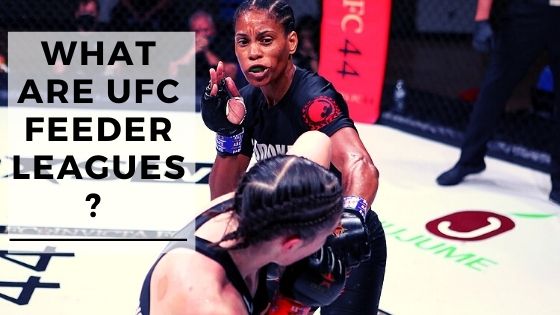 The UFC doesn’t just grab a bunch of inexperienced fighters and throw them in the octagon to see what happens. They need to hire already developed fighters, to keep up with the elite level that the promotion represents.

UFC feeder leagues are MMA organizations that, basically, partner with the UFC.

Lots of fighters want to get into these because the UFC typically hires fighters from these organizations.

These leagues ‘feed’ fighters, they’re a breeding ground for prospects and give young fighters a chance to get some experience under their belt before they go to the ‘big leagues’.

How does a fighter get into the UFC?

The NBA, NFL and many other sports have drafts or rookie leagues where prospects are evaluated. MMA doesn’t work like that.

There are different ways a fighter can get into the UFC. You can apply, use connections or, the most common road: fight in one of the feeder leagues.

Most regional circuits work as developers for the UFC. They work as a sort of stepping stone.

Battlefield Fight League, a small organization from British Columbia, in Canada, has sent four of its fighters over to the UFC.

Invicta Fighting Championships, an all-women organization, has sent fighters like Angela Hill and Megan Anderson on to the UFC.

These are some of the UFC’s best fighters in woman MMA, which explains why Invicta is probably the most popular feeder league.

Bellator MMA is a very well-known MMA promotion. But we’ve seen fighters grow and develop their skills in Bellator, and then move on to the UFC.

The most recent example is Michael Chandler. In Bellator, he was the undisputed lightweight champion.

The future of feeder leagues

It’s been a couple of years since, two of the UFC’s top leading feeder organizations, Resurrection FA and Legacy FC, merged.

A few months later he signed a contract with the UFC, where he became the undisputed flyweight champion.

Ed Soares, LFA’s CEO, has stated that he expects their promotion to become known more and more as the Division-I NCAA (highest college sports level) of MMA.

Khabib has stated that he wants it to become the new UFC feeder league, bringing in talent from around the world.