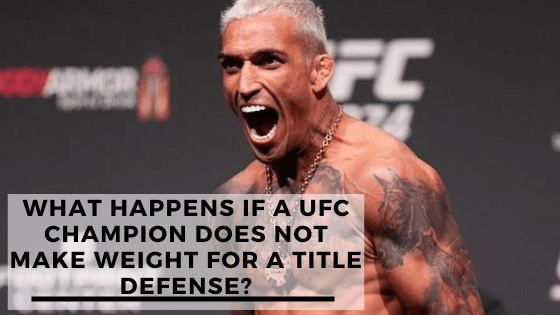 This question was raised when Charles Oliveira missed weight the night before his title defense against Justin Gaethje in UFC 174.

Before Oliveira, this case has never happened in the UFC.

According to the rules, a fighter who misses weight forfeits at least 20% of their fight earnings to the opponent.

The opponent can choose not to carry on with the fight, or it can be contested as a catchweight bout, above the required weight limit of the division.

A fighter who misses weight will also forfeit their share of a possible “Fight Of The Night” bonus.

If a fighter misses weight by a huge margin, they are pulled from the fight and replaced.

Or the fight is called off and the opponent still gets paid regardless.

Not forgetting to mention that UFC president Dana White will be mighty pissed at them.

In the case of a title fight, the party who misses weight will be ineligible to be champion even if they win.

The reigning champion will most likely be stripped of their belt for missing weight.

If they win, the belt is declared vacant, and if the challenger wins, they become the new champion.

Depending on the outcome of the fight, there could be an immediate rematch.

Yoel Romero knocked out Luke Rockhold in a bout for the middleweight interim championship but was ineligible to win the belt because he had missed weight. He then faced Robert Whittaker for the vacant undisputed title, losing by decision.

Deiveson Figueredo faced Joe Benavidez for the vacant flyweight title and knocked him out.

However, he had missed weight and was ineligible for the belt.

He won the belt in an immediate rematch.

Missing weight is a breach of contract and a serious offense, even though it is fairly common.

A fighter who misses weight repeatedly will be either forced to move up a division or get cut from the promotion.

What happens if a UFC champion refuses to fight the top contenders?

UFC champions are required to not only be the best fighter in their division, but also the most professional.

It is their responsibility to always make weight and fight the number one contender, or anybody else put in front of them.

A champion may have some influence but does not have absolute control over whom they fight next.

The UFC matchmakers have the final say.

The champion might propose a fight to the organization, and if it makes sense to them they make it happen.

Champions have to fight whoever the hierarchy matches them up against, unless the top contender is unavailable, or the UFC decides that another fighter is more deserving of the title shot.

Sometimes a fighter with massive hype or a rivalry with the champ can be bumped to a title shot, bypassing the top contender, especially if they have already just been beaten by the champion.

A UFC champion who avoids facing top opponents will be stripped of their title.

Are There MMA Organizations Paying Their Fighters In Crypto?

Can You Throw Someone Out Of The Cage In MMA