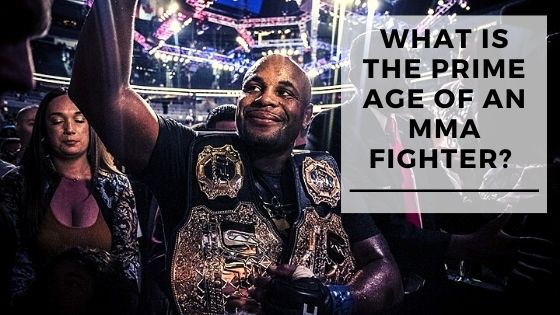 An athlete’s prime refers to a period in their career where they are consistently performing at an absolutely outstanding level, usually spanning a few years.

This period of repeatedly high-level performances could end up culminating in a peak for the athlete, during which they enjoy success. Numerous studies have shown that the age range in which most enter into their athletic prime is between 20 and 30.

Prime ages for MMA fighters couldn’t be more varied. While fighters are often in amazing physical condition (in terms of speed, strength and reflexes) around their mid 20s, it is mostly towards their early 30s that they begin to combine technique with experience, and hence become better fighters.

Recent statistics show that in professional MMA fights, the younger a fighter is the more likely he is to win.

Those statistics coincide with the fact that the current average age for UFC champions is 33, showing that success for MMA fighters may come at later stages than when they are experiencing their physical peaks.

In the cases of former UFC featherweight champions José Aldo and Max Holloway, it does look like their primes came around their mid-20s, with Aldo first becoming champion at the age of 24 and Max at the age of 25.

Many other notable fighters who experienced their peaks in and around this age include former UFC two-division champion Connor McGreggor and former bantamweight champions TJ Dillashaw and Demetrius Johnson.

Some examples of fighters who peaked much later in their careers (with an average age around their mid-30s) are: Tyrone Woodley, Michael Bisping, Daniel Cormier, Stipe Miocic, Glover Teixeira, and Jan Blachowicz, to mention a few.

This difference in prime ages for MMA fighters can be ascribed to several factors:

Fighters who rely heavily on their speed and strike volume may find it harder to reproduce those levels as they begin to age.

They would have to modify their styles and adopt a different approach to fights if they are to find a prime after the ages where they have statically peaked.

2. The age when they started fighting

All fighters start to experience physical decline as time goes on. But those who started fighting earlier usually tend to experience that decline even faster in their careers.

The amount of wear that the body has gone through in training, conditioning and actual battle will start to take a toll faster than it would have on those who started a bit later.

Fighters who suffer a lot of damage during fights tend not to stay too long in the sport, and hence tend to peak earlier in their careers when their chins and reaction times had not yet been weakened from repeated beatings.

Lighter weight divisions require speed and volume outputs, and this is often only possible when fighters are in their physical primes, and beyond which it becomes difficult to replicate.

Those in the heavier weight divisions rely on power and adjustments, and this suits older fighters who don’t necessarily have the cardio but possess the strength to compete successfully at that level for many years.

In essence, while the prime of MMA fighters may depend on several factors that make it difficult to pinpoint a single age as the one where they clearly reach it, we can agree on an age range of 28-33, during which their physical peaks coincide with increased knowledge and IQ about the sport, and ultimately better mixed martial arts.

How long does an MMA fighter’s prime last?

MMA fighters have a prime period that spans the duration from when they enter into their peak to the beginning of their decline. On average, fighters can usually compete at a high level for about 10 years.

Those who enjoy such outstanding success during this period that it can be referred to as having a prime, do so for only about 4-5 years. It may be even shorter for some while it could be much longer for others.

Cody Garbrandt can be said to have had a prime that spanned only one year culminating in his impressive title-clinching victory over Dominick Cruz in 2016.

Fighters such as Fedor “The Last Emperor” Emelianenko, who dominated Pride FC, Affliction and M1-Global for six years, and Jon “Bones” Jones who has been at the top of his game for close to 10 consecutive years, experienced much longer primes.

Can A Female MMA Fighter Beat An Untrained Man In A Street Fight?