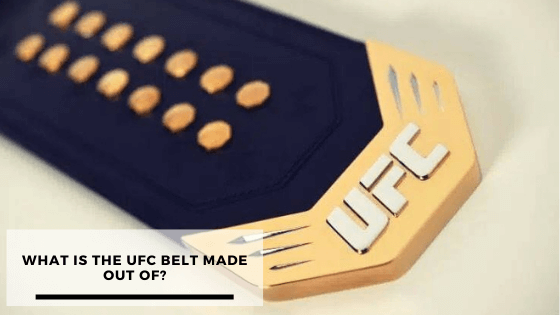 At the end of a UFC title match, when the ring announcer (usually the legendary Bruce Buffer) echoes out the results of the fight, accompanied by the tag “…and new!”, in the case of a new champion, or “…and still!”, in the case of a successful title defense, the following ceremonial activity involves adorning the victor with the prestigious UFC belt as in a crowning moment.

We have seen the pride and admiration that UFC champions attach to the UFC belt and for them, it holds huge importance as it signifies the sentimental and monetary representation of what it means to win a UFC title.

Monetary and not just sentimental because UFC belts are very valuable pieces of hardware specially crafted with different precious materials befitting of a UFC champion.

And when you consider that the new UFC Legacy Championship Belt, introduced in 2018, is said to be three times more valuable than the original UFC Classic Championship Belt, then you really start to wonder what UFC belts are made out of.

Do UFC Belts have Real Gold?

UFC belts are made of specially embossed genuine leather plated with real, solid 24-carat gold. Much of the 10.45 lbs weight of the belt is gotten from the central, left and right gold platings, and the gold button snaps that adorn it.

They are also responsible for much of the total estimated cost of the belt.

What are the Stones in the UFC Belt?

UFC belts are made up of a number of gemstones. On the central gold plate there are 25 cubic zirconia stones to represent the 25th anniversary of the UFC in the year 2018 when the new Legacy Championship Belts were introduced.

Additionally, on both the left and right-sided straps of the belt, the gold platings contain eight cubic zirconia stones each.

What do the Rubies on the UFC Belt mean?

Interestingly, after a victory in a championship bout, one of the stones on the left plate is replaced by an original ruby stone of the same size.

So for example, Israel Adesanya’s UFC belt has six ruby stones on the left plate while Petr Yan’s has only two.

If a fighter achieves the truly remarkable feat of being victorious in more than eight championship bouts, then the cubic zirconia stones on the right strap of the belt will start to be replaced by the ruby stones.

How much does the UFC Belt cost?

The cost of a UFC belt may depend on several factors such as the fighter wielding the belt, how many championship bouts they’ve won, the circumstances of them winning the belts and so on.

However, taking into account majorly the cost of the specially embossed leather, 24-carat solid gold platings, the forty-one cubic zirconia gemstones, and other intricate designs that went into the making of the belt, the base cost of a UFC belt originally, is at least $330,000.

But we would think that if these belts were to be auctioned off on ebay or any such sites, then the price could be much higher as they are truly a collector’s item.

If you’ve thought of buying a UFC belt yourself there are fancy replicas made available for sale on the UFC online store.

These replicas are made from faux leather, zinc alloy casts with 24-carat gold and silver platings, synthetic acrylic stones and brass button snaps. They are sold at around $1000, although you might be able to get it cheaper or more expensive on ebay, depending on some additional added value such as a fighter’s signature, etc.