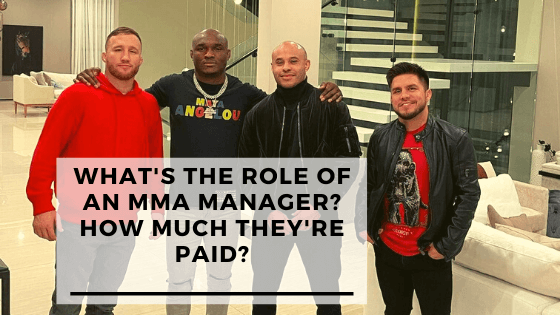 What is the role of an MMA manager?

An MMA manager is in charge of a lot of aspects of a fighter’s career. Fighters may choose to manage themselves, but there are so many tasks and responsibilities that it often becomes too much for them to handle.

A manager works in the business side of a fighter’s career. They are in charge of setting up bouts with opponents.

For an MMA fighter to have a successful career they need to be matched with opponents that more or less fit their current skill level.

If an up and comer fighter is forced to take a fight against a veteran ranked opponent it may mean a sudden end for their careers. They may take a lot of damage, which will affect them in the long run. It will also kill their confidence. A manager’s job is to prevent that from happening.

Of course, this is not always an option. Under the UFC, fighters are paid as independent contractors. This means that they don’t have the same benefits as employees do.

This should mean a fighter has some freedom to choose to say ‘yes’ or ‘no’ to fights offered to him/her.

However, this is not the case. The UFC will regularly pressure their fighters into taking late-replacement fights, to fight on a regular basis and against all kinds of opponents.

If fighters don’t follow the company’s mindset and rules, they are simply cut from the roster.

This is the biggest difference between boxing and MMA. In boxing, it’s all about the fighter. In MMA, it’s mostly about the event.

You either fight whoever the company puts in front of you, or you don’t fight at all. Managers constantly have to deal with this, putting a lot of effort into their relationships with MMA promotions.

Fighters don’t always make good negotiators. Fighting for a living is expensive, and many former MMA fighters have complained that sometimes they’re even losing money in the process.

One of the manager’s most important tasks is to negotiate good deals for their fighters. It could be promoting turnout to fights, or trying to get sponsors to sign with their fighters.

A manager also supervises training, helping fighters to get the right coaches and gyms. If a fighter is not in top physical shape, he/she won’t be able to perform in the octagon.

This is important because, how you fight, is as important as if you lose or win.

Most fighters are usually cut from the roster after three or four straight losses. A notable exception is Leonard Garcia.

He was released only after his fifth loss, mainly because of how he fought. He won Fight of the Night six times, and Fight of the Year in 2010.

Michael Chandler is 1-2 in the UFC. Fans loved his performance though in his fight against Justin Gaethje.

That, in a way, is still a win. Gaethje himself has been knocked out several times during his UFC run. But ‘The Highlight’ is still many fans’ favorite fighter, including UFC commentators Jon Anik and Daniel Cormier. Drawing a crowd matters in MMA!

Once a fighter begins to gain more fans and fighting opportunities, his manager may negotiate payment increases from sponsors and promoters.

Sometimes this means months of ongoing negotiations. During the process, a manager will advise a fighter, keeping them focused, and helping them reach their long-term goals.

How much do fighters pay their managers?

Like we said, managers, deal with the business side of fighting. They work on contracts, a fighter’s expenses, and sponsors.

However, they also advise their fighters with important career choices. They are also the voice of the fighter with the promotion and the media.

How are they compensated for this?

If a fighter loses and receives $25,000, then the manager receives $5,000. This is a standard fee though. Managers and fighters each have their own individual agreements.