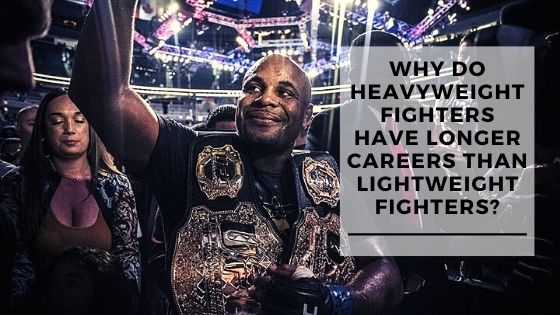 If you take a glimpse at the current heavyweight and lightweight division, you’d see a noticeable difference in their age.

While the lightweights are young, the heavyweights are at an age where they should be retired.

What is more amazing is that heavyweights seem to be better as they age. Looking at the light-heavyweight division in the UFC, the champ Glover Texiera is 42 years old. And former champ Jan Blachowicz is almost 40 as well.

The same trend is seen in the light heavyweight division, Stipe Miocic is almost in his 40s.

Jon Jones is looking to make his in-ring heavyweight debut as he reaches his 35th birthday. The trend is also seen in boxing with fighters like Tyson Fury.

Surprisingly heavyweight fighters seem to peak at their late 30s.

Are there any reasons why heavyweight fighters seem to have longer careers?

Is this all a fluke? A once in a generation stunt by the heavyweights. Or is there a reason why heavyweight careers last longer?

There are a few factors that result in a longer career for heavyweights compared to lightweights.

The first is weight cuts? Yes, there are long-term effects of cutting weight and heavyweights don’t need to be in aggressive weight cuts.

This balances out the disadvantage that lightweights are under due to cutting weight.

There is another aspect of cutting weight that actually results in a shorter career for lightweights. Once they reach a certain age, their bodies cannot handle the aggressive weight cuts.

Dehydration can turn deadly. Due to this they no longer can make weight. Some try shifting to a heavier weight class, but only some succeed. This is a reason why lightweights have shorter careers.

Why do heavyweights peak at their late 30s?

One of the reasons for this is power. Heavyweights rely mostly on power compared to lightweight relying on speed and technique.

Power hits its peak in the early or mid-30s. You rarely see contestants in strong man competitions who are under 30 years old. So heavyweights are most devastating after they hit their 30s.

Finally, we have the experience factor. Heavyweights deal in one-shot knockouts. Only with experience do you learn to be cautious and scout shots before getting hit. This allows them to be better fighters as they get to their late 30s.

How Can I Beat A Wrestler In A Self-defense Situation?