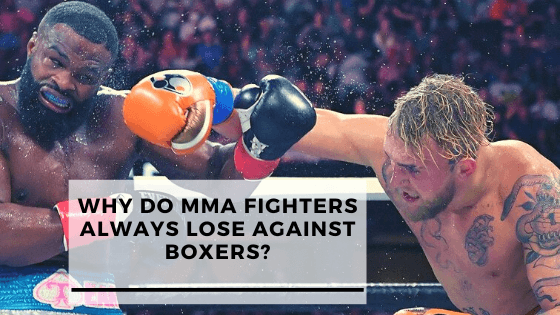 Over the years, there have been several crossover matches between boxers and MMA fighters.

These usually have the MMA fighter go over to the boxer’s world: boxing ring, boxing rules, boxing gloves, and so on.

So it shouldn’t come as a huge surprise when these bouts almost always end up with the boxer on top.

Why does this happen exactly, though? Let’s take a closer look.

MMA develops a different kind of conditioning than boxing does.

Boxing is an aggressive sport, as all combat sports are. But it also gives special importance to the long game.

Stamina is a key part of the sport, because boxers need to manage their energy for almost an hour.

After defeating Connor McGregor in 2017, Floyd Mayweather stated that his goal was not to immediately KO the Irishman.

Mayweather played the long game, he allowed McGregor to fire away all his heavy punches early in the fight.

After weathering the initial storm, Mayweather went to work.

But, overall, a boxing match lasts longer. After the 25-minute mark, an MMA fighter might start to see his cardio fade away.

After that same mark, a boxer is just getting started.

Going back to ‘The Money Fight’ example, Mayweather got increasingly aggressive after the sixth round.

At the same time, you could visibly see McGregor getting more and more tired.

By Round 10, the ‘Notorious’ couldn’t even get his hands up anymore. He was exhausted, but Mayweather’s O2 tank was still intact.

McGregor’s cardio ended up failing him because his body had been conditioned for years to fight in MMA. It’s very difficult to re-train an athlete used to shorter fights to prepare him for a longer battle of attrition.

Even though footwork is key in boxing, the stance tends to be rigid, because a boxer’s legs have been trained and conditioned to support the upper body.

MMA’s stances are fluid because they need to manage different distances.

Most MMA fighters tend to have open stances. Fighters who come from a kickboxing background learn to manage distance differently.

Take a look at this article if you want to find out how many MMA stances are there.

Even Muay Thai fighters, who tend to fight in the clinch, have to manage kicking distance as well.

This rigid stance means that boxers’ punches will be more powerful.

There are other reasons why a boxer’s punch will be more powerful, going back to conditioning and specific shoulder, arms and core training.

Even though all MMA fighters learn boxing combinations, they simply haven’t put in the same amount of time and energy to perfect the techniques.

A great example of this is the jab. Boxers spend countless hours perfecting their lead hand.

They use it as a range-finder, as a flicking jab, as a power jab, as a setup.

They will also use it as a defensive tactic, to parry an opponent’s jab, or even as a lead-hook or check-hook.

There is no way an MMA fighter can catch up with this when they have to split their training time between muay Thai, grappling, jiu jitsu and so on.

Boxers develop defensive techniques that are very different from MMA.

A boxer doesn’t have to worry about checking leg kicks or stuffing takedowns.

Boxers are used to standing in the pocket, moving their torso from side to side, forward and back.

Tyson Fury is a great example of this. Even though he fights in the heavyweight division, he’s famous for his defensive maneuvers.

Compare that to the current UFC heavyweight division.

Head and shoulder movements are also key in a boxer’s defensive arsenal.

Mayweather was famous for his impregnable philly shell defense.

Even when an MMA fighter might decide to stand in the pocket, he might not always be able to get his offense going.

And, lacking the finesse of the boxer’s defensive skills, he might get hit with some hard body shots in the process.

But what about bare-knuckle boxing?

There is one exception to all this: bare-knuckle boxing.

Boxers constantly use their gloves as a defensive mechanism. It is a huge part of their defensive strategy because they can use the padding to cover their face and body.

When you remove that, boxers will be at a disadvantage against MMA pros, who are used to fighting with 4oz gloves.

Since these have little to no padding, they don’t rely on them for cover.

This is not to say that a boxer will always prevail. Recently, Anderson Silva, at 46 years of age, defeated Julio Cesar Chavez Jr. via split decision.

In general, though, it’s safe to say that under boxing rules, a boxer will almost always take home the win.

After honing a very specific set of skills over years of training, an MMA fighter simply needs to cover too much ground to go over to the boxing world.