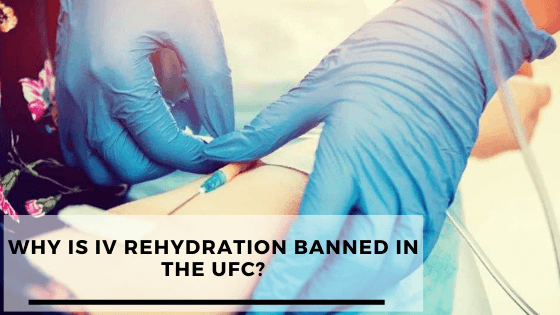 IV (intravenous) rehydration is the injection of specially formulated sterile solutions directly into the veins, for the purpose of preventing or reversing dehydration.

In MMA, it is used by fighters after cutting weight, to rapidly regain body fluids between weigh-ins and fight night.

On October 1st, 2015, UFC along with USADA enacted a new rule banning the use of IVs for fighters, with the exception of only health emergencies, surgical procedures, or on the grounds that there is no more than 50 ml salt in the solution.

What is Weight Cutting?

Weight cuts are a huge part of the UFC.

Due to the existence of multiple weight divisions, there is minimum to maximum weight limits that a fighter must meet to compete.

For example, a fighter who is registered as a lightweight must weigh in not more than 155 lbs before the fight.

However, it is common that fighters weigh well above these limits normally, meaning they have to cut significant weight during fight camp to make weight.

Weight cuts are mostly achieved by draining the body of water weight, and going through intentional dehydration.

A fighter can spend hours in a sauna trying to lose every bit of water mass.

Interestingly, after this grueling procedure, the fighters are then given 24 hours to rehydrate before the fight itself.

This is where IV rehydration comes in.

Why Was IV rehydration banned by USADA?

It is well known that UFC fighters, hoping to gain some sort of advantage, cut insane amounts of weight to fight in their registered divisions.

To make this process more ridiculous, after they make weight in the weigh-ins, these fighters are permitted to rehydrate to whichever weight of their choice.

IV rehydration makes it easier for them to have even more extreme weight cuts, and then rapidly recover fluid within 24 hours.

There has been enough criticism about these “weight bullies” who won’t fight at their natural weight classes. Guys like Paulo Costa, Gleison Tibau have been known to cut enough weight for 3 divisions.

The ban on IV use may have partly been to control extreme weight cutting and rehydration, but since then fighters have gone on to perfect the act of cutting tons of weight and rehydrating before fight night.

However, the involvement of USADA is a clear pointer that IV rehydration was banned for anti-doping reasons.

IVs can be manipulated to mask the use of prohibited substances during drug testing.

The UFC-USADA partnership has strictly enforced bans on the use of performance-enhancing drugs (PEDs).

IVs can be utilized to hide the presence of these substances in the blood or urine, or their effects on hormones, thus circumventing the effectiveness of drug testing.

It is safe to say that this is the real reason for the ban on IV rehydration.

The UFC has shown more aversion to drug violations than extreme weight cutting.

Some banned PEDs are:

Before the arrival of USADA, many fighters were reliant on the use of these drugs, but nowadays cheating has been made more difficult.

Fighters are subjected to a series of random drug tests and face severe punishment if they are unavailable for testing or if they test positive for banned substances.