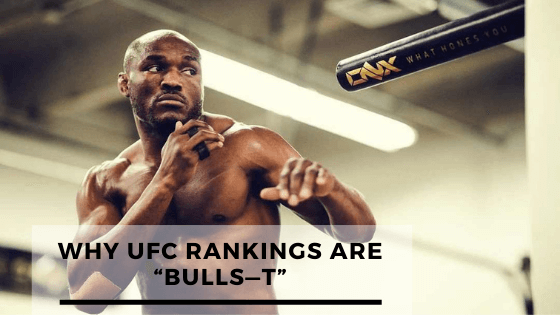 The UFC rankings are built around the belt holder, the undisputed best fighter in the division.

The rankings consist of the top15 fighters in the division, besides the champion.

The list is updated weekly, within 48 hours after each fight card.

This means it is regularly tinkered with, erratic and subject to all sorts of change.

While we can agree that the rankings are useful for fans as a visual representation of what goes on in each division.

It has been repeatedly proven that the rankings are a figurehead, and can be easily bypassed at the whims of the organization.

UFC’s priority is to make the most revenue possible.

They go about achieving this by creating matchups that they decide will be most interesting to viewers, and have no apologies if this means butchering the official rankings.

The ranking system has been regularly subjected to criticism for so long, that for fighters and fans alike, it’s become a mere inconvenience to unconsciously complain about before moving on.

Here we take a look at some of the main points that generate these discussions.

1. Lack of transparency and credibility of those voting on ranking:

UFC ranking is decided by an independent panel of journalists, selected from verified MMA  media channels from all over the world.

The UFC derives its ranking from a compilation of these votes.

It was brought to light in 2020, that the panel briefs voters on what a fighter’s ranking position should be in the event of a win or a loss.

Nowadays, the panel members are no longer made public, so there’s no way to genuinely authenticate the people making these votes.

No way to guarantee if these voters themselves are credible MMA authorities who are knowledgeable enough to make this decision.

2. Rankings are biased or inaccurate:

Time and again, there has been outrage among fans because the ranking just doesn’t make any sense.

Despite Conor Mcgregor having not won any fights at Lightweight since 2016, he is ranked No.9 in the division.

Ahead of Rafael Fiziev and Arman Tsarukyan, both on 5 fight win streaks and ranked 10 and 11 respectively.

This is one example of many such occurrences over the years and across all the divisions.

The UFC is in the business of making fights that sell.

This means if they decide that a matchup between two fighters makes the most sense financially, it is set up regardless of their rankings.

While he was ranked number 3, he fought against an unranked Nate Diaz, one of the UFC’s cash cows.

So he’s gone from beating an unranked opponent to fighting for the title.

This reiterates how the rankings can be treated as a joke at will by the UFC hierarchy.  pound for pound rankings.

This list comprises the 15 overall best fighters in the UFC, regardless of weight class.

It is compiled with the same system as the regular rankings and aimed at determining who the best fighters are across the roster, irrespective of size.

The pound for pound ranking consists of the champions of each division, and their best contenders.

The voting is influenced by win streaks, numbers of title defenses, the quality of opponents faced, and dominance in the octagon.

The problem with the pound-for-pound ranking is that historically it has been used as a negotiation tactic to punish fighters who were not on good terms with the UFC.

This happened with Jon Jones and Francis Ngannoun during their beef with Dana White.

Why Do MMA Fighters Have More Losses Than Boxers?

How Much Does Bare Knuckle Fighting Championship Pay Fighters?