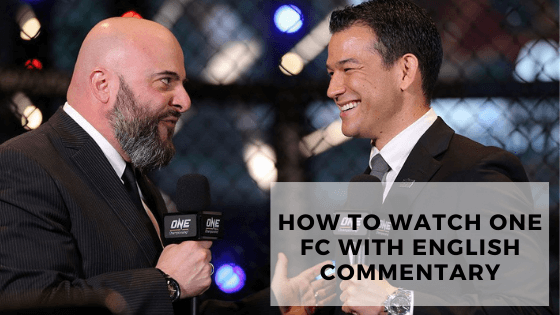 Since it was founded in 2011, ONE Championship has steadily grown to become the largest MMA promotion in Asia and the second largest in the world in terms of following.

For Asian and non-Asian fans alike, watching ONE Championship MMA and Muay Thai events has become easier thanks to various attractive and affordable TV and streaming services, among other options.

Many ONE Fighting Championship events are completely free to watch in over 150 countries.

Today we will be looking at all the available options for anyone interested in getting into ONE Championship by watching live events or replays of previous shows.

Where can I Watch ONE Championship Live with Commentary?

The ONE Fighting Championship official site, watch.onefc.com is a dedicated website where you can watch all of the promotion’s events with English commentary live on TV, tablet or any other mobile device.

To gain access to the site during live shows or to watch previous events, you will need to sign up by filling in some details or logging in if you have already created an account.

The website is available in over 150 countries around the world except in Japan, India, and New Zealand, where alternative means are available for the fans in those countries to view the events live.

In China, ONE Championship events can be viewed live on BTV, Douyin, Henan, and iQiYi channels at around 8:30 p.m. CST (Chinese Standard Time).

Disney+ Hotstar and Star Sports Select 1 are two of the Indian TV channels that broadcast live ONE FC events at around 3:30 p.m. IST (Indian Standard Time).

You can watch ONE Championship live shows in Indonesia on Vidio.com and MAXstream by 5 p.m. Western Indonesian Time.

Abema is a Japanese live streaming service that broadcasts ONE FC events at around 7:30 p.m. JST (Japanese Standard Time).

Skynet in Myanmar shows a live broadcast of ONE Championship fighting events at around 4:30 p.m Myanmar Time.

In the Philippines, One Sports TV shows full ONE FC events starting at around 8:30 p.m Philippine Standard Time.

VieON and HTV The Thao show live ONE FC events starting at around 7:30 p.m. Indochina Time.

What other Online Platforms can I use to Watch ONE Championship?

This is the official Youtube channel of ONE FC. Fans can tune in to watch complete English live streams of ongoing events on the channel.

The ONE Super App is the official mobile application of ONE FC where you can watch live events in English.

The app is free to download and after some registration processes, you can view ongoing and previous ONE Championship bouts on it.

In addition to a dedicated website, a youtube channel, and a mobile application, ONE FC fans can also freely live stream events on the official Facebook page of the organization.

One Championship events can also be watched live for free in the USA via the Bleacher Report mobile app, website, and official Youtube channel.