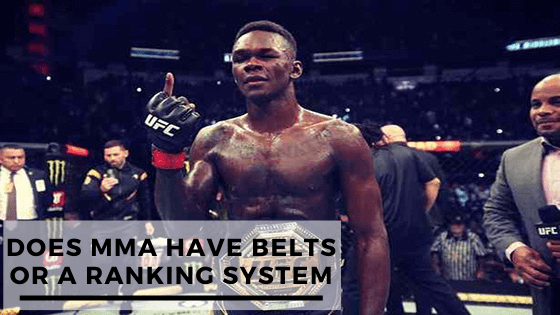 MMA, or mixed martial arts, is a culmination of different martial arts styles that have evolved over hundreds if not thousands of years.

The main difference between MMA and other combat sports, such as boxing or judo, is MMA’s lack of clearly defined rules for what can and cannot be done in the ring.

For example, Pride FC allowed kicks on downed opponents, but UFC does not.

This has led to criticism from some about the legitimacy of the sport but has also allowed the sport to grow and evolve in ways that other more traditional combat sports have not.

MMA Does Not Have Any Belts

One area where MMA differs from other combat sports is its ranking system or lack thereof.

Unlike karate or judo, which have clearly defined ranking systems with belts awarded to fighters as they move up in rank, MMA does not have any such system.

This is not to say that there are no rankings in MMA, as various media outlets do compile lists of the top fighters in different weight classes, but these rankings are not official and are not used to determine who fights whom.

There is no discernible way to know the skill level of an MMA practitioner because they can’t simply say, “I have a black belt in MMA.”

Rather than ranking fighters by their skill levels, the UFC (Ultimate Fighting Championship), the largest MMA organization in the world, uses weight classes to distinguish between different levels of competitors, much like boxing.

Fighters generally fight against opponents who are within a few pounds of them.

There is no intrinsic difference in how a fighter should be viewed based on whether they are fighting at 185 pounds or 155 pounds.

The following are the various weight classes used in the UFC today:

MMA does not have belts or a ranking system like other combat sports.

Though fighters may have respective belts in traditional martial arts like karate or judo, MMA fighters are differentiated by weight class and not skill level.