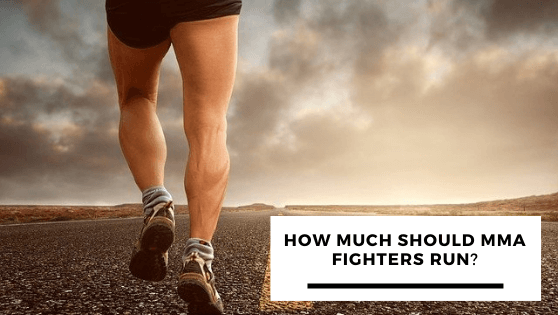 Over the years, there has been widespread debate and indecisiveness on the importance of running in MMA. With a lot of athletes recently abstaining completely from all roadwork, while on the flip side, there are also a lot of athletes who engage in a lot of running during and off fight camps.

So what is the reason for this widespread disparity about something that seems as simple as running?

To answer this question, we’ll be taking a look at some of its perceived disadvantages, its merits, and how to run effectively.

Disadvantages of running for fighters

Does running have disadvantages?

Running puts an enormous strain and task on the body, especially joints in the lower part.

In fact, a major long-term effect of constant running is knee and ACL injuries.

Kamaru Usman, UFC welterweight champion says that he doesn’t run anymore as he has bad knees, and running would just make things worse.

Also, Roadwork takes an enormous amount of time, time that a lot of fighters feel could be put to other uses in MMA.

There is also the belief that running adds no direct benefit to a fighter’s skill set, as there are other ways to improve ones cardio, like swimming, or even cycling.

Advantages of Running for fighters

Despite the disadvantages above, a lot of fighters still engage in high running activities.

The Diaz brothers, Conor McGregor, Israel Adesanya and even the great Floyd Mayweather all incorporate roadwork into their training and daily routines.

What is the reason for this?

Well, despite recent scientific bias towards swimming, running has proved to be the most effective way of improving one’s cardio and stamina by improving your heart.

Running also strengthens the leg and its muscles by putting it under demanding conditions; this will be of direct benefit to the ability of fighters to maintain footwork for a longer period than their opponent.

So, now that we’ve taken a look at the advantages of roadwork for fighters, the next question is; how often should you run? and how to run effectively?

The methodology of running for fighters

Running could be in a lot of forms; there’s the long-distance marathons, sprints, hill running, treadmill running, Et al.

Each of these is responsible for a different aspect of a fighter’s arsenal.

While long-distance running lends itself to improving a fighter’s stamina and cardio, multiple sets of short-length sprints will increase the fighter’s ability to explode.

How often should a fighter run?

Ideally, running for 4 to 5 miles daily should be optimal for a fighter, this will strengthen cardio and prevent wear and tear around the lower parts of the body.

Fighters should practice sprinting for about a minute, before slowing down to a jug, doing this consistently till the fighter is able to reach 2-minute sprints without rest does volumes for the fighter’s ability to push a fast pace in a particular round without getting tired, and will also aid how fast the fighter can recover in between rounds.

While there is no specific guideline that all fighters should follow when it comes to running, the above will enable the fighter to maximize all the potential benefits and advantages associated with roadwork and become a better all round fighter.