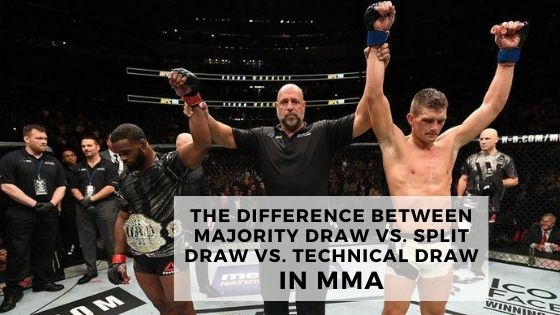 What is a majority draw in MMA?

A majority draw, for instance, means that two judges have seen no clear winner, and score the contest a tie, while a third judge believes one of the fighters gained the upper hand.

Since the majority scored it as a draw, then there is no declared winner, with the referee simply raising both fighters’ hands in the air.

One of the better-known examples of a majority draw happened during UFC 205. Back in 2016, Tyron Woodley defended his Welterweight belt against Stephen Thompson.

The five-round bout ended in a majority draw, with two judges turning in a tied score, and a third giving the win to Woodley (48-47).

What is a split draw in MMA?

A split draw refers to the outcome of a fight being scored a draw by one of the judges judge, and the other two judges awarding the win to different fighters.

Ion Cutelaba fought Dustin Jacoby at UFC Vegas 25. Cutelaba had a very strong opening round, but Jacoby bounced back and put on a strong performance in rounds 2 and 3.

After a 15-minute back-and-forth war, the bout resulted in a split draw.

Here is the scorecard of Ion Cutelaba Vs. Dustin Jacoby

What is a technical draw in MMA?

A technical draw happens when a fight has to be stopped because of damage taken by a fighter via an accidental injury -usually a cut- or an intentional foul.

Let’s say a fighter gets injured in the first round. He/she is able to continue fighting but, as the fight goes on, the injury worsens.

If the bout has to be stopped after half the scheduled rounds have been fought – mid-round 3 if it’s a 5-round fight, for instance -, the injured fighter is declared the winner if they are ahead in the scorecards.

However, if the injured fighter is behind or tied, then the result of the bout will be a technical draw.