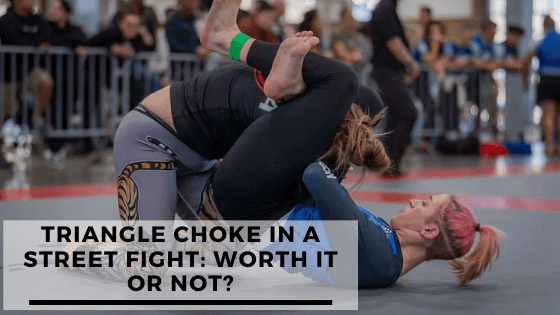 As a martial arts practitioner, you may be aware of the triangle choke as a submission hold.

It is commonly used by practitioners of the grappling martial arts, Brazilian Jiu-Jitsu.

Inside the cage, many fights have found success with this choke.

The following are some of the biggest triangle choke finishes in UFC history:

It’s clear that this technique is extremely effective even against some of the most experienced and accomplished practitioners.

But why is that so?

Let’s look at what makes the triangle choke such a dangerous submission hold.

What Is The Triangle Choke?

Like any other stranglehold, the choke is a grip around the opponent’s neck.

In the case of the triangle choke, it also involves the arm.

All chokes work by cutting off blood flow to the brain by compressing the carotid arteries on each side of the neck.

This can lead to unconsciousness and even death if not released in time.

You can see what it looks like in the illustration below.

The Dangers Of Using A Triangle Choke In A Street Fight

While the triangle choke is an incredibly effective martial arts technique, it is not without its dangers, especially in the street.

Using any kind of choke in a street fight is extremely dangerous.

This is because you can not be sure if your opponent has a medical condition that the lack of oxygen could exacerbate.

If that is the case, the person you are trying to choke could die, even if the hold is released in time.

Gyms and training centers have mats on the floor to soften the impact on athletes thrown to the ground. But in a street fight, there is no such thing as mats.

If you are thrown down on the concrete, the impact could cause serious injury.

Furthermore, there could be broken glass or other sharp objects on the ground, which could cause even more serious injuries.

One of the biggest concerns with applying a triangle choke in a street fight is that your opponent can clasp their hands together, lift you, and slam you on the hard ground.

That could lead to you hitting your head on the ground and sustaining a severe concussion or even dying from the impact.

What’s more, if your opponent is high on drugs or adrenaline, they might not feel the effects of the choke until it’s too late.

Bitten In The Groin Area

Your opponent could take the opportunity to bite you in whichever area they can get their mouth to. This is especially true for the triangle choke, as your opponent’s face will be close to your groin area.

Getting Attacked By A Weapon

Last but not least, one of the most dangerous things about using a triangle choke in a street fight is that your opponent could have a weapon that you might not see in the heat of battle.

If this is the case, your opponent could take advantage of your position and stab you in the neck or other places.

Since the triangle choke controls the neck and one arm, the other arm is free.

This is where the weapon could come into play.

So, Is The Triangle Choke Worth Doing In A Street Fight?

As you can see, there are many dangers associated with using the triangle choke in a street fight.

However, that does not mean it is not worth doing.

If you have a good understanding of the technique and can apply it quickly and precisely, then there is no reason you should not use it in a street fight.

Just be aware of the dangers, and make sure you are prepared to face them.