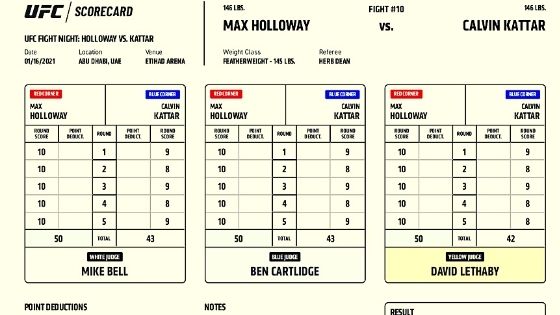 In MMA a 10-8 round basically means that the fighter who won the round did so by a large margin.

In promotions like the UFC, and especially in ranked fights, it is rare that a fighter is awarded a 10-8 round.

All MMA bouts are scored by three judges under the ‘Ten-Point Must System’. The winner of any given round must be awarded 10 points, whereas the loser is given 9 points or less.

The only exception is an even round, where both fighters are awarded 10 points.

The system prioritizes certain criteria, all of which are offensive. A judge will look at which fighter displayed the most:

That being said, some judges have stated that, in practice, the most important of the three is effective striking/grappling; the other two are secondary assessment tools that are not deemed as relevant as the first one.

In boxing, a knockdown means a guaranteed 10-8 round. In MMA this is not the case.

For a fighter to get a 10-8 round he/she must show that they have dominated, over an extended period of time, the action of the round.

Effective striking and grappling are shown by how certain offensive maneuvers have had a significant impact on the opponent.

This is why televised MMA, shows viewers how many significant strikes were landed by each fighter, or for how long ground control is maintained after a takedown.

Judges may also consider scoring a 10-8 round even when there is no significant or visible impact on the losing fighter.

Such may be the case when a fighter is put in a constant defensive position for a whole round, with no attempts to react or counter when an opportunity arises.

This may also be the case when a fighter spends most of the round pinned to the ground. Even if this doesn’t result in a submission, a judge might still give a 10-8 score if there are numerous attempts at finishing the fight by the dominant fighter, or the pinned opponent shows little offensive output.

Max Holloway scored several 10-8 rounds during his fight against Calvin Kattar, displaying vast superiority in effective strikes landed, and even breaking a UFC record in the process.

During the fourth round of the bout, Holloway landed a staggering 141 out of 191 attempted strikes -a 73% accuracy rate- whereas Kattar succeeded in landing a mere 34 of 71.

The round was awarded a 10-8 in favor of Holloway by all three judges.

Take a look at the scorecard of Max Holloway Vs. Calvin Kattar where Holloway scored several 10-8 rounds

The former Lightweight champion holds the record for the most dominant 10-8 rounds in UFC history.

Taking down his opponents, and forcing them against the cage, The Eagle would lock up their legs, and proceed to land blow after blow.

This often led to submission opportunities opening up. Even when this wasn’t the case, Khabib’s opponents often lacked the skills to defend against these types of attacks, which usually meant that, even if they survived the round, it would most certainly mean a 10-8 score against them.

What Is The Difference Between ONE Championship & UFC?