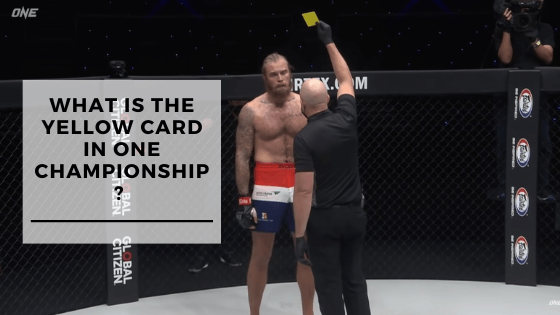 Over the course of a bout, ONE Championship fighters can be sanctioned in different ways. Chief among these is the yellow card.

If a fighter gets three yellow cards, he/she gets disqualified. If both fighters get disqualified the fight is considered a no contest.

There are a number of occasions in which a referee will show a yellow card to a fighter.

The most common is when a fight slows down and neither fighter is engaging in any real attempts to attack.

Throughout the entirety of round 1, Svirid kept circling away from Santos. By the end of these opening minutes, the referee decided the situation merited a yellow card, which he showed to both fighters.

Santos, baffled at a sanction he didn’t feel deserved, started complaining that he had shown a willingness to engage throughout the round, but his opponent kept running away.

After a second lackluster round, and repeated pleas for action, the ref pulled out a second yellow card. Santos ended up on top, outstriking his opponent in the third round, and ultimately winning the fight.

Another situation in which a yellow card may be issued is if a fighter commits a foul.

A prime example of this happened when Alain Ngalani, a veteran of the promotion, was striving to break his losing streak against a young (and undefeated) Thomas Narmo.

The Norwegian, who received the strike while on the ground, was unable to continue the fight.

The heavyweight bout, which was fought during ONE’s Battleground II in Singapore, ended in a no contest.