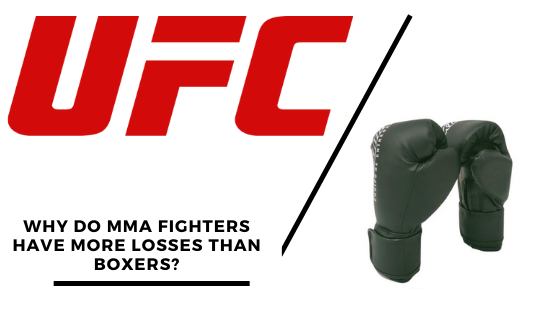 Well, we’re going to be answering the big question:

Why do MMA fighters seem to have more losses than boxers?

While there have been more and more MMA promotions coming up, the number of promotions still weighs heavily in favour of boxing.

The relatively few promotions in MMA with one in the UFC being the most respected means that there is a higher chance of the best fighters coming in contact with each other, thereby increasing the chance of getting beaten.

Take a look at this instance, boxing has four major governing bodies; IBF, WBA, WBO, and the WBC, each of which has its own global prestige.

So if we take the heavyweight division, it makes it possible for there to be four recognized heavyweight champions of the world, without them having to fight each other.

In MMA, this won’t be possible, because regardless of promotions like Bellator or One FC, the UFC heavyweight champion still holds a lot more recognition and prestige above the others.

And if you want to be recognized as the heavyweight champion, you’ll have to fight against the best in the UFC, thereby increasing your chances of getting beat in comparison to boxing.

There is a higher risk of suffering injuries in training camps in the life of Mixed Martial Arts fighters than that of boxers; this is because of the higher variety that MMA fighters have to deal with.

Consequently, because of these injuries, many MMA fighters enter the octagon at less than a hundred per cent, which raises their risk of suffering a loss.

This point might generate a lot of disagreement from Pro-boxing readers among us, but you can’t deny its validity. For example:

Mayweather’s 50 and 0 boxing record is highly inflated by a lot of “easy fights”, regardless of his all-time great status, he avoided Manny Pacquiao for several years while he fought easier fighters.

This would not be possible in MMA, as the smaller crop of fighters makes cherry-picking fights not sustainable, at all.

Fighting past their prime

The likes of Anderson Silva, Fedor, and Chuck Lidell, have all been guilty of one thing; fighting past their best years.

Unlike someone like Khabib who retired while he was still on top, the aforementioned fighters perhaps rode their luck too much and didn’t know when to quit.

Anderson Silva was an absolute phenom for years, going on a remarkable run of 16 consecutive title defences, but instead of retiring while on top.

He stuck around for too long, and just recorded one win from his last 9 fights, with a multitude of losses tainting his almost perfect legacy.

The same could be said for a host of other MMA greats.

A lot more ways to lose

Do we really need to say anything more on this?

In MMA, you could get elbowed, kneed, kicked, wrestled to the ground, even submitted, as opposed to boxing where it’s just punches you have to contend with.

The fact that MMA fighters have to contend with more risk in terms of variety coming their way, means that the risk of defeat will also increase.

In summary, we can see that athletes competing in MMA have a far higher chance of suffering losses than those competing in boxing. This isn’t to say that one is more competitive than the other ( that’s an argument for another day), but that’s just the way it is.

So regardless of the number of defeats an MMA legend has, they must be accorded the same level of respect as their boxing counterparts.