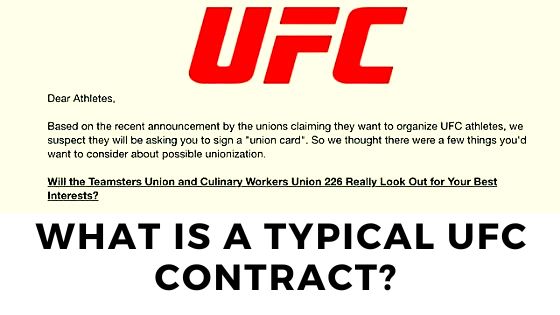 In recent years there’s been a lot of talk about the UFC and how the company handles fighters’ contracts.

This long ongoing scrutiny and interest have come about as a result of the UFC’s emergence as a multi-billion dollar corporation.

With fighters still complaining about how much they’re getting paid, and how their contracts are being renegotiated, we don’t expect this interest to go away anytime soon.

Information on UFC contracts is not officially disclosed by the company, but some information has been made public through media leaks and the antitrust lawsuit filed against the UFC in 2014.

In this article, we’ll be discussing the binding contents of a typical UFC contract, and highlighting its most important parts.

What is a Typical UFC Contract?

A UFC contract works like most other personal performance contracts. The UFC signs a fighter and agrees to pay him/her a base salary for a specified number of fights.

Under this contract, the UFC has exclusive rights to that fighter for the agreed-upon fight period. For example, a fighter could be signed on a contract that pays $20,000 per fight for 5 fights (around 18 months).

This simple summarization doesn’t even begin to tell the complete story, however, as UFC contracts contain a number of binding agreements that cover pretty much everything that ties a fighter to the company, all under 28 different sections, referred to as “Articles”.

These articles cut across several requirements that are features of a typical UFC contract, and they include:

1. Grant of Promotional and Ancillary Rights, And Promotion

This aspect of the contract contains the agreements that see a fighter granting *Zuffa (parent organization of the UFC) control over his/her promotional and ancillary rights.

That is, Zuffa now has the right to secure, promote, arrange and prepare all MMA contests that the fighter will be engaged in while under contract.

The UFC can set up bouts for the fighter against a designated opponent subject to the fighter’s approval, but not to be unreasonably delayed or rejected.

Ancillary rights grant Zuffa the authority to make use of the fighter’s “image” in any form of published materials including advertisements, PPV, video games and so on.

The term article of a UFC contract contains complete information about the duration for which a fighter has been signed to fight in the UFC.

The minimum number of fights, and the approximate number of months are specified. There is also information on the terms for extension or termination of the contract by the UFC.

This contains an agreement by the fighter to comply with the terms of a “Bout Agreement” as provided by the Standard Fighter Contract.

It also contains information about the terms of compensation, wherein it is stated that a fighter will be paid a base salary taking the form of a “Fighter’s Purse”.

A “Win Bonus” clause is also present which guarantees the fighter an additional amount if and only if the fighter is declared the winner of a bout.

Even more additional compensation in the form of performance-related bonuses are available to the fighter if they are so awarded.

Information about how PPV bonuses are shared between the UFC and the fighter are also provided.

As regards Incidentals, this affirms that a fighter and one of the Fighter’s Affiliates are entitled to transportation, lodging, meals or meal allowances up to what is specified in the contract. The fighter is also entitled to bout tickets, the number of which is stated according to further terms.

Under this aspect, the fighter agrees to conduct himself in accordance with the accepted standards of decency, morals and societal conventions.

The fighter is now acting as a representative of the UFC and must act accordingly. The fighter must also maintain a high level of sportsmanship and professionalism.

The fighter shall not use any controlled substances as stated but not limited to those specified in the contract.

In the case of an injury, disability or retirement that renders a fighter unable to participate in a bout arranged by the UFC, the contract states the rights that Zuffa has in such a scenario.

Zuffa has the right, but not obligation, to terminate the fighter’s contract (including withdrawing recognition, championship status/belt) if certain conditions as per the above, are fulfilled or otherwise.

5. Insurance, Assumption of Risk, and Indemnification

Zuffa will provide health and death insurance for a fighter as required by the applicable Athletic Commission.

In this the fighter acknowledges and assumes all risks that could arise from professional unarmed combat.

The fighter agrees to indemnify Zuffa and all associated with the company from and against claims and damages arising from or relating to negligent acts by the fighter of the Fighter’s Affiliates.

This is a very interesting feature of a typical UFC contract that states that during a one-year period after the conclusion of the “Term” of the fighter’s contract, Zuffa shall have the option to match the financial terms and conditions offered to the fighter by any other promotional entity.

The fighter is not permitted to accept any offer made by other promotional entities without first giving Zuffa a written notice of the terms and conditions of that proposed contract, including but not limited to the identity of the promotional entity making the offer.

The fighter provides several warranties to Zuffa and the UFC, including but not limited to preparing and honestly competing in bouts to the best of his ability.

Zuffa also warrants its position and abilities as an LLC MMA promotional body.

8. Prohibition on Use of Intellectual Property

Unless given written approval from Zuffa, the fighter shall not make use of any of Zuffa’s intellectual property rights as specified in the contract.

This aspect of the contract states that the fighter (or his affiliates) cannot be found donning any material that belongs to any company that is in competition with Zuffa.

Zuffa is able to provide the complete fightwear to make the fighter distinguishable for television purposes, left to the discretion of the company.

One of the most important aspects of a UFC contract is the confidentiality article which reads that the fighter may not disclose to any third-party (other than agents or financial advisors) any information about the terms and conditions of the contract, except in some cases, usually involving the law.

Another supremely important aspect of a UFC contract that obligates the fighter to complete a full medical examination and undergo testing and receive affirmative clearance prior to each bout, included but not limited to tests for several specified illnesses and drug tests, within a given period, and by a neutral medical service provider.

The above requirements constitute the “Articles” that form a typical UFC contract. A few aspects of the contract will be tailored to suit the individual fighter, and in some cases, a signing bonus will be included.

All involved parties will be given a space to tender their signatures, that is, the fighter, the company president, and a Chief Legal Officer, with the final prints of the contract providing a final signatory line for an acknowledgment and acceptance of the terms of the contract by the fighter.