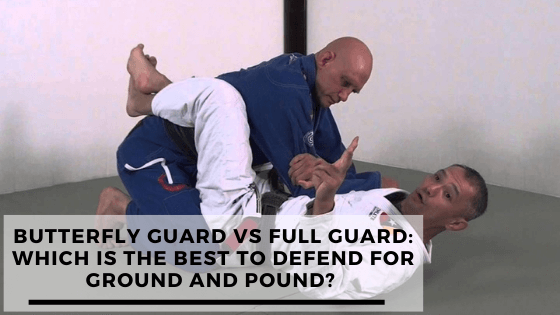 Specialists such as Demian Maia and B.J Penn have provided a blueprint on the effectiveness of guards in defending strikes on the ground.

However, there is still debate surrounding which guard is more effective between butterfly and full guard.

What is a Butterfly Guard?

The butterfly guard is one of the most utilized guards in jiu-jitsu.

The butterfly guard technique consists of hooking your legs onto your opponent’s legs and utilizing that as leverage for sweeps and submissions.

There are a few fundamentals of the butterfly guard that distinguish it from any other guard.

The first fundamental is maintaining activity with your legs.

Fighters should always try to actively hook their legs to the inside of their opponent’s legs.

In practical terms, this would mean adjusting your legs in response to your opponent’s counter-movements. If they try to shift their hip position, you would adjust your leg position proportionately to maintain leverage.

The second fundamental is having concave shoulders.

Concave shoulders is when your shoulders are pointed towards your opponent.

It creates a rocking chair effect, which allows you to generate enough leverage to disrupt the center of gravity of your opponent and sweep him/her.

The butterfly guard is a great counterattacking technique that allows you to create attacking situations from a defensive position.

What is the Full Guard?

Also known as the closed guard, the full guard is the most famous guard position in MMA for a good reason.

The full guard is when your back is on the mat and you wrap your legs around your opponent’s torso, locking them around their spine.

This is an effective technique for various reasons.

Firstly, it gives you the ability to control distance.

As you’ve locked your legs, you limit your opponent’s lower body movement.

You can also use your arms to tie up your opponent’s arms and limit their ability to throw strikes.

You can also initiate over and under clinches where your opponent has no attacking opportunity.

The majority of full guard attacks require you to have a great understanding of how to use your legs and core to create an opening for a submission.

For instance, a triangle choke requires you to momentarily gain control over your opponent’s arms in order to lift your legs over onto their shoulders.

Once your legs are on their shoulders, you need to understand how to generate and maintain power over the neck, in order to submit them.

So which guard is best to defend ground and pound, butterfly guard or full guard?

A full guard is more effective in defending ground and pound than a butterfly guard, especially for novices.

Full guards allow you to sap your opponent’s energy and disrupt their rhythm.

The butterfly guard is also effective but its biggest weakness is vulnerability to strikes when not executed well.

Are There Any MMA Fighters Showing Signs Of Brain Damage?