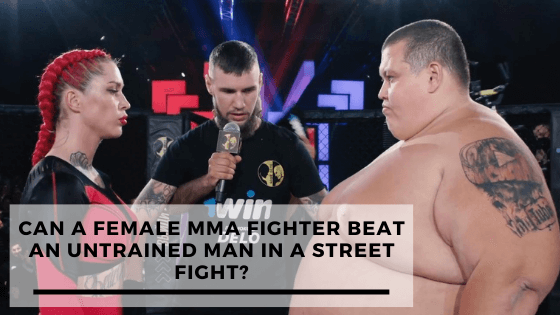 Combat sports enthusiasts have surely heard the common hot topic of a female pro-MMA fighter taking on an average man.

Though the answer might look easy, the MMA community is divided in their opinions about the outcome.

Even without the gender difference, MMA is the combat sport that is closest to real fights, with fewer rules and gear.

MMA athletes practice different combat forms that help them fight in many positions, from standing to laying on their backs.

A pro fighter also has a lot of stamina which can outlast any normal person’s energy reserves.

Considering the above reasons it stands to reason that a female pro athlete has more experience in fighting situations.

With expert training in techniques to deal that lethal blow while the average Joe might only lunge and grapple.

The female fighter also has better judgment and nerve control than the untrained man, who is more prone to mistakes under the adrenaline rush.

As the pro fighter has trained in MMA, she has the stamina for a sustained fight.

If she can outlast the initial outbursts, the man might get tired and likely to put up a poor defense.

On the other hand, the average man is heavier and has more upper body strength than a woman.

Weight makes a significant difference, which is why championships have different weight titers.

This advantage could lead to the pro fighter struggling to pin the man to the ground, while any lucky punch from him could deal heavy damage.

On average, men have more reach than their female counterparts, resulting in more punches thrown and hitting the target.

Another aspect to consider is the setting of the fight.

The female fighter is accustomed to matches in the rings with referees, rules, and time-out options while a street fight has none of those.

Foul play is acceptable, and the fighters might use any means available to bring down their opponent.

Also to note is the use of deadly weapons, which is prohibited in MMA and fighters do not train to defend against them.

Therefore the female fighter could be at a disadvantage here.

All things considered, in a street fight between a professional female MMA fighter and an average untrained man, the female fighter has the upper hand.

This is not merely a theoretical observation, the internet is full of examples of pro-female fighters knocking random men out.

While it is also pertinent to say examples in favor of the average Joe can also be found!