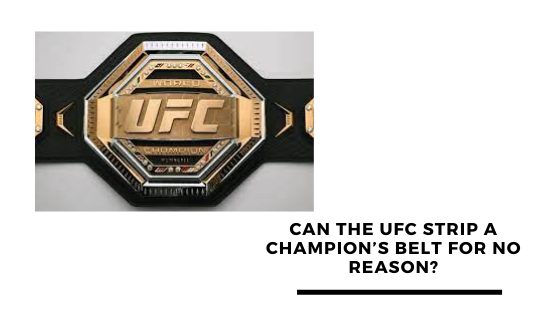 Stripping a champion of their belt is not a rare occurrence in mixed martial arts and the UFC in particular.

Since 1998, the UFC has stripped 15 interim and undisputed champions of their titles.

The latest champion facing the threat of being relieved of his belt is undisputed UFC heavyweight division king, Francis Ngannou who has been involved in some unpleasant back and forths with the company.

Interestingly, the very first champion to be stripped of their belt in the UFC, Randy “The Natural” Couture, was also a heavyweight champion in similar contract loggerheads with the promotion.

It would seem that the UFC could force any one of their champions to vacate their title whenever there are disagreements between the organization and the fighter.

But in actuality, there are a number of reasons why the UFC could strip a fighter of their title due to the many contractual technicalities that bind the fighter and the organization.

The most popular reasons include:

As was the case with former UFC heavyweight champion Frank Mir, who had an extended period out of the sport with horrific leg and knee injuries after surviving a ghastly motorcycle crash.

Currently, there is no set time limit for a sidelined fighter to return to defend their belt, so the decision to strip them of their title is entirely up to the UFC higher-ups.

If a UFC fighter fails a drug test, that is, tests positive for a banned substance, they are provisionally suspended from competing in the sport for a time.

If the banned fighters happen to be champions at the time of the failed test, they are immediately stripped of their title.

A UFC champion can be stripped of their title if they fail to adhere to the Athlete Code of Conduct.

Any champion that is involved in legal issues that paint the UFC in a bad light will usually be stripped of their belt, such as former heavyweight champion and number 1 pound-for-pound fighter Jon Jones, who in April 2015 fled from a car crash scene that he was involved in.

Becoming a multi-division champion in the UFC is one of the dreams of fighters in the organization.

Conor McGregor, one of four fighters who have been champions of two divisions simultaneously, had to be stripped of his featherweight title because he was essentially putting the division on hold.

Issues such as being available to defend the title and making weight are some of the reasons why being double champ puts the divisions on hold.

It is only expected that should a champion want to leave the UFC for another MMA promotion, that they would be stripped of their belt.

BJ Penn, Jens Pulver, and Randy Couture are former UFC champions who were stripped of their title as they departed the organization.

So we see then that the UFC can at any time strip a champion’s belt, but not quite for no reason at all.

While the reasons could be entirely unfair and only in the interest of the organization, it will usually be within the confines of a UFC contract that fighters themselves agreed to.