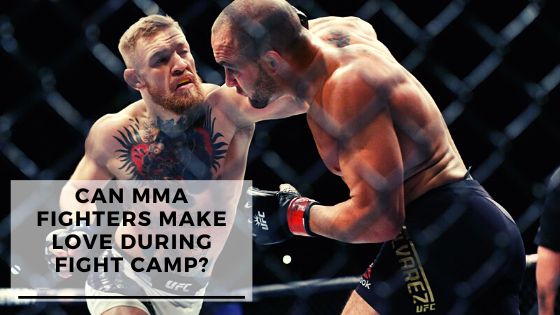 Even the most casual MMA fans know that fighters aren’t supposed to make love during fight camp. Is there any truth to this statement?

We have heard of fighters say that they refrain from such activities during fight camp. One of them is Mohamed Ali who is said to stay away from the game for over 6 weeks as a fight draws closer.

Then we have Freddy Roach who says he has his own 10-day span. The list of names goes on for a while.

When fighters and fans are asked about this they have a range of answers. Some say that it could weaken the legs.

Then some say that it relaxes the mind, and the fighter won’t be aggressive. But shouldn’t you be relaxed heading into a fight? And some even talk about energy levels.

Similar to the fighters who avoid it, some fighters make love during fight camp.

One of them being Olympic gold medalist, and former UFC champion Ronda Rousey. She says that having intimate relations heading into a fight raises her testosterone levels.

Another legend who says he engages in such activities even during the day of the fight would be George St. Pierre.

There are different views between fighters regarding this subject heading into fight week. While some fighters strictly avoid it, there are fighters who welcome it, and then there are some who don’t care.

Are there any scientific reasons?

This is a myth that has been around for a while. But is there even an ounce of truth to this myth?

Numerous studies have been conducted about this myth. And they have all proven that it has no impact on a person’s fitness. It will not affect a fighter’s performance in any way.

On the contrary, it could improve the performance of a fighter. Recovery is a huge aspect during training camps. The 2 things important for recovery are relaxation and a good night’s sleep.

Making love reduces stress levels, which in fact will improve recovery. It will also release a hormone called Oxytocin, which improves the quality of sleep. Other than the biological advantages, this will improve a fighter’s self-confidence.

This proves that there are no adverse effects of going at it leading up to a fight and it could actually be beneficial.

But still, some fighters and coaches are strict about making love during fight camp. They have their own beliefs regarding the myth.