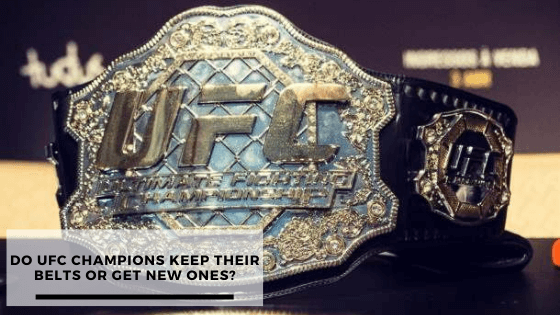 There is an iconic photo of former UFC flyweight god, Demetrius “Mighty Mouse” Johnson, posing with twelve UFC Classic Championship belts that signified each of his twelve victories in UFC title fights (11 successful defenses and the initial win).

That photo pretty much answers the question on whether UFC champions get new belts for every title fight win.

A new belt is issued to a UFC champion with each victory in a championship bout.

Which means, champions who have successful title defenses will get a new belt for each defense, in addition to their original belt.

Problems with the cost of handing out a new belt every time a fighter defended his/her title, the case of Demetrius Johnson being the standout, led to the adoption of a new legacy system of awarding belts.

Since the introduction of the new UFC Legacy Championship Belts to commemorate the 25th anniversary of the UFC in 2018, a different, more subtle but classy method has been devised to represent fighters’ victories in championship bouts.

The UFC Legacy Championship Belts that were introduced in 2018 got a lot of media and fan attention for the exquisite designs and detail that were put into their construction.

The most notable addition to the new belts, however, was the idea of replacing one of the eight white cubic zirconia gemstones on the left-sided strap of the belt with ruby stones of the same size to signify a successful title fight defense.

The date and location of the victory would also be engraved adjacent to the stone.

With the old Classic Championship Belts, a UFC champion who defended his title would have gotten a new belt in addition to his first one, to crown the feat.

So for example, UFC welterweight king Kamaru “The Nigerian Nightmare” Usman, would have gotten six UFC Classic Championship Belts – one for his initial win over Tyrone Woodley, and five more for each of his five successful title defenses after that.

Instead, with the new Legacy Championship Belts, Kamaru Usman got a single belt (starting with eight white cubic zirconia stones on the left gold plate) for his initial win, and five of those eight stones were replaced with rubies to represent each defense.

Champions will have to submit their belts to the UFC to be “upgraded” with the precious stones.

A UFC champion may only have more than one belt if they hold titles in multiple weight classes.

Top One FC Fighters Vs. Top UFC Fighters, Who Wins?

How Can I Join Bellator MMA As A Fighter?